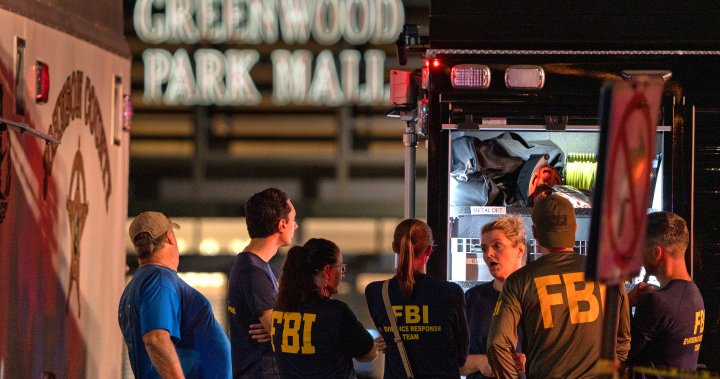 Four people were killed in a shooting Sunday evening at a mall in Greenwood, Indiana, and two other people were taken to the hospital with injuries, local police say.

The shooter is among the four dead.

“It appears that a good Samaritan that was armed observed the shooting in progress and shot the shooter,” Jim Ison, chief of police for the Greenwood police department, said during a press briefing. He noted this individual, who has been identified as a 22-year-old male from Bartholomew County, was believed to have used a handgun.

“This type of situation is horrible,” said Ison. “It’s rocked us to our core.”

The investigation is still in the early stages and the shooter has not been identified.

Those injured included a 12-year-old girl who had a “very minor wound” on her back. She was transported to the hospital and is in stable condition.

“She is expected to be just fine,” said Ison.

The condition of the other wounded victim is unknown.

There are multiple casualties reference this incident. There is no known ongoing threat. Multiple agencies are assisting with clearing the mall. https://t.co/OBmm6IdYUd

The shooter had a rifle with “several” magazines of ammunition when he entered the food court and began shooting.

Multiple agencies, including the FBI and the Department of Homeland Security, responded and remained at the scene to investigate.

A backpack found near the bathroom of the food court has been cleared by police, as have all stores in the mall.

“We are confident that there are no additional threats at this time,” said Ison. “We’re doing the best we can right now. I want people to feel safe in Greenwood.”

As police begin to process the crime scene, they’re expected to remain at the mall into “the early hours of the (morning)” Ison added.

He did not have an answer on whether the mall would reopen on Monday.

The motive of the shooting has not been identified.

Greenwood is a south suburb of Indianapolis with a population of about 60,000. Mayor Mark Myers asked for “prayers for the victims and our first responders.”

“This tragedy hits at the core of our community,” Myers said in a statement.

Another update on the shooting will be provided by police on Monday at 2 p.m.

— With files from The Associated Press