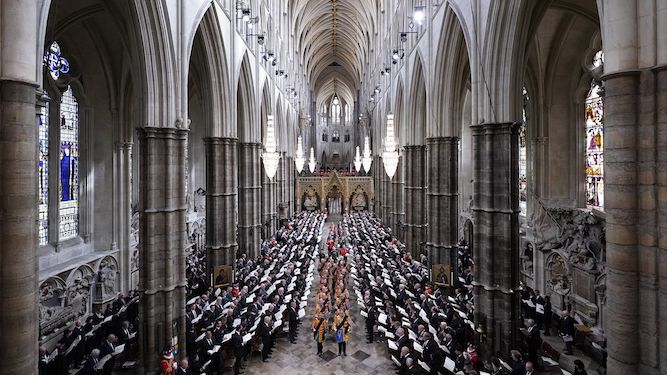 YESTERDAY was a day unique in our recent history. A day that cannot be matched. A day that saw the whole nation bemused to be British.

From the Shetland Isles to the Scilly Isles, from Strabane to Dungeness, from babes in arms to centegenarians, a country came together to say ‘What’s that they’re putting on the coffin now? The what standard? Is that orb glued down?’

No matter who or where you were, every Briton watched proceedings in patriotic befuddlement, asking ‘Are those the Queen’s guards? No? The Grenadier guards? The Royal Horse Guards? Well which are they?’

As the procession passed through London, few us truly understood what was happening, relying entirely on hushed BBC commentary that if we missed a murmur of left us baffled as to who was firing cannons and why.

‘Westminster Abbey’s big, isn’t it? Where are they going now? They surely can’t expect Charles and Camilla to walk all the way to Windsor? Oh, they’ve got in cars,’ was the chorus heard throughout the UK.

As traditions entirely unfamiliar to us unfolded, a whole nation questioned their immediate families as to why Prince Harry was not saluting the Cenotaph, what the Queen’s bargemaster does all day and how exactly they would employ a personal piper.

We clung to those few moments that were comprehensible, and if that included a horse attending the funeral then we did not question them. For this day was stirring, moving and frankly beyond most of us. On this day we were entirely lost.