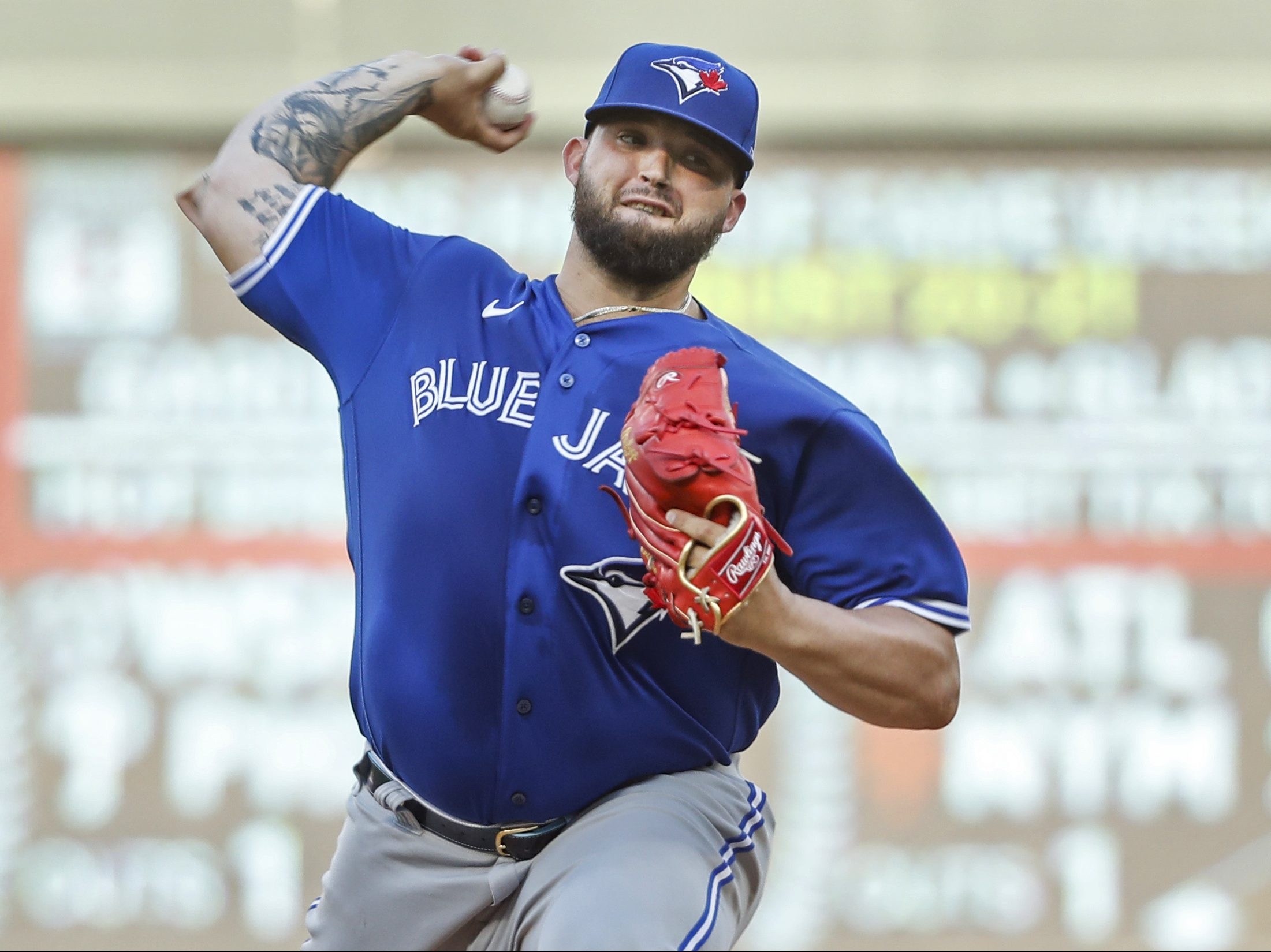 MINNEAPOLIS — Big body doing its thing, Alek Manoah was cruising on a perfect summer night in the Twin Cities.

Retiring the first 10 batters he faced, it looked like it was going to be one of those nights for the 6-foot-6, 260-pound right hander.

And then his night — which ultimately would end in a 9-3 blowout win over the Twins — was put to the test.

But the Blue Jays beast is sometimes at his best when he has to dig a little deeper to finish the task.

A Carlos Correa grounder that went off the back of his arm — the elbow was fine, he said afterwards — resulted in an infield hit. What could have unravelled after a pair of walks loaded the bases, instead saw Manoah limit the Twins to a single run.

It wasn’t his prettiest effort at times, but it sure was efficient. In yet another outing when he went through six complete, Manoah held the Twins to just two hits and two runs, at times willing his way through the contest.

Manoah walked four to go with his five strikeouts on a 97-pitch night but never truly seemed in danger. Hostile environments be damned as he has allowed more than two earned runs in just one of his 11 road starts this season.

That’s what the Jays continue to get from their most reliable starter, however — a competitive drive that matches his talent.

“That’s the biggest goal for me coming into every year to be a constant workhorse in that rotation and the team knowing I’m going to go out there and give them a ton of innings,” Manoah said. “It might not be pretty every time, but I’m going to do everything I can to give them the innings.”

Through 21 starts now, Manoah has logged 132 innings, an impressive workload for a 24-year-old navigating his first full season in the big leagues.

“He’s a big strong dude who understands what to do,” said Jays manager John Schneider. “He knows when to step on the gas and when to step off the gas, when to lift off of it.

“I think he fits that mould to where he’s at the point of being a workhorse.”

This being 2022, it’s unlikely that Manoah will be the first Jays pitcher to reach 200 innings since Marcus Stroman did so in 2017. But his beastly qualities have been impressive.

“I think he’s strong enough,” Schneider said. “We’re comfortable with him (and his workload) and what he does between (starts).”

For Manoah, it was his 17th quality start, tied for the third most in the majors..

“He was nasty,” Schneider said afterwards. “He found another gear like he always does. He’s a stud, man.”

In what was shaping up to be a tight ball game, Manoah improved to 12-5 with a little help from his friends, new and old.

A three run sixth gave the Jays their first lead of the night, a margin that was supplemented by a six-back in the eighth. Ir was a solid start to the four-game series against the Twins, one that already has a healthy dose of Canadian fans from Winnipeg, Thunder Bay, Kenora and the like.

“I knew it was going to be a good crowd,” Manoah said of the gathering of 39,030 on hand to see the Jays face the AL Central-leading Twins. “They’re a good team over there. I had a little extra fire coming into this one.”

Besides his defensive versatility, the Jays are enthused about the speed Whit Merrifield has and plan to use it accordingly.

They didn’t have to wait long, either.

In his third at-bat — and with Lourdes Gurriel Jr. at third — a sharp ground ball up the middle resulted in an infield base hit (with the help of Twins first baseman Luis Arreaz bobbling the ball).

Whitfield showed similar wheels in that six-run eighth when he scored from second on a routine single up the middle by George Springer.

Schneider certainly likes the dynamic Merrifield brings on the bases.

“We talked about spots he likes to run and what he likes to do on the bases,” Schneider said of Whitfield, who also looked comfortable in centre field. “It’s cool to talk to a guy like that who really has a passion for it. He’s going to fit right in.

“He’s got the green light and he’s ready to go.”

Would the Jays have preferred to land a higher impact reliever at the trade deadline? Of course.

But as the market played out and as Tuesday’s 6 p.m. cutoff approached, teams that had some of the most attractive arms either didn’t want to part with players who had multiple years of team control or were asking too much.

That left the additions of Anthony Bass and Canadian Zach Pop as the two arms most viable for general manager Ross Atkins.

Both Bass and Pop were active and in the bullpen for Thursday’s opener of the four-game series here. Bass came in to pitch the ninth, allowing a solo homer in his return to his former club. Pop had warmed up as a precaution earlier when Manoah ran into his brief spell of near trouble.

It certainly seems as though the Jays will only go as far at their offence will take them and a late-game outburst on Thursday was the latest evidence. A 13-hit night was highlighted by a six-run eighth inning that included a line drive three-run homer from Vlad Guerrero Jr. (his 22nd) and a bases-loaded single from George Springer that scored a pair … Those 13 hits, by the way, marked the 47th time they’ve registered double-digit knocks, tied with Colorado for the most in the majors … To make room for the new bodies, the Jays optioned catcher Zack Collins and relievers Matt Gage and Matt Peacock to triple-A Buffalo … The Jays entered Thursday’s game with a 13-4 record since July 12, the best in the AL since then.