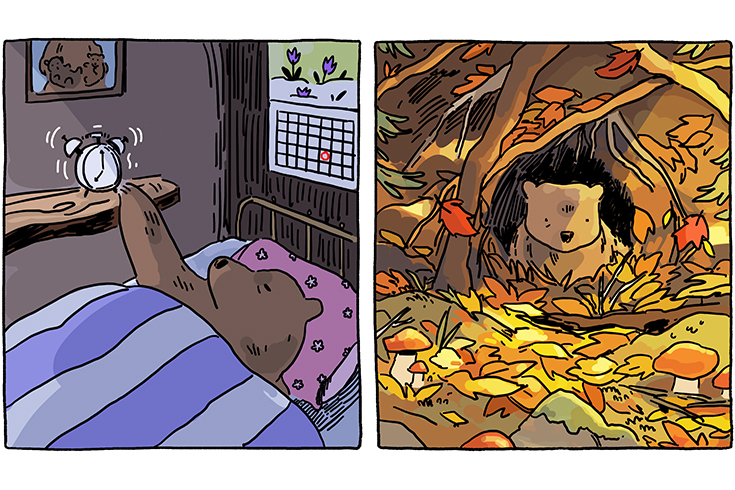 Over the past few decades, climate change has been driving what scientists refer to as “season creep” in some parts of the world: winters are getting shorter, spring is coming earlier, and summers are longer and hotter.1 Besides disrupting human life, these changes to the seasons are having a profound effect on animals. We asked Madhur Anand, a professor of ecology at the University of Guelph’s school of environmental sciences, what rising temperatures mean for our ecosystems.

Over the last year, Canada experienced a lot of extreme weather, including deadly heat waves, a brutal wildfire ­season, and flooding in BC. Are these events connected to climate change?

When most people think about climate change, the first thing that comes to mind is the temperature. But precipitation is an equally important variable. Those two factors largely explain the current vegetation patterns in Canada—the temperate rainforest in BC, the grasslands in the Prairies, the tundra in the Arctic, and the boreal forest spread across most of the country. Rising temperatures are contributing to larger atmospheric rivers—streams of water vapour that travel through the sky—over the West Coast. BC already has high rainfall, but the addition of these atmospheric rivers means even more rain and snow.2 Complicating that are the nearby mountains, which contribute to landslides like the one we saw last November.

Because rain and snowfall aren’t evenly distributed, other parts of the country—mainly the Prairies—experience drought. Those regions are predicted to get hotter and drier, wreaking havoc on our agricultural systems and our forests.

We’ve seen the effects of changing climates on people—from geo­graphic displacement to loss of livelihood. How are changing seasons affecting animals?

All living things have metabolic processes that depend on temperature. When the temperature changes, it can disrupt everything from habitat and food availability to migration and mating patterns. The most common examples are with predators and prey. Consider birds feeding on caterpillars. If climate change is causing caterpillars to emerge earlier, some species of birds may not be able to adapt to this change.

Our seasons are already looking—and sounding—different because of these changes. Certain species of songbird and spring ephemeral wildflower, for example, are arriving earlier or later because of increasing temperatures. Trees are also blooming earlier.

What are the consequences of these changes?

If you look at historical maps of North America from around 20,000 years ago, almost all of it was covered by a glacier. As the temperature changed, that glacier started to retreat, opening up more and more space in the north and allowing species to migrate.

That process occurred over thousands and thousands of years, but the changes we’re seeing now are much faster than before humans were in the picture. There are biophysical limits to how far a species can disperse, and ecologists are concerned that organisms can’t migrate quickly enough to accommodate the changes. One big consequence? More species going extinct.3

Disruption of natural rhythms also asks us as humans to adapt. If animals change their migration patterns, the whole ecosystem changes. Because we ourselves rely on that system for things like food, shelter, and fresh water, it becomes very easy to see why this matters.

1. According to a study published in Geophysical Research Letters, between 1952 and 2011, the average length of summer weather in the northern hemisphere increased from seventy-eight to ninety-five days.

3. As of 2021, there were 554 animal species at risk of extinction in Canada, according to the Committee on the Status of Endangered Wildlife in Canada.

As told to Sebastian Leck. This interview has been edited for length and clarity.

Madhur Anand is the author of the book of poems A New Index for Predicting Catastrophes and the memoir-in-halves This Red Line Goes Straight to Your Heart, both published by Penguin Random House Canada. She is a professor of ecology and sustainability at the University of Guelph, where she was appointed the inaugural director of the Guelph Institute for Environmental Research. She is also a member of the Educational Review Committee at The Walrus.

Irma Kniivila is an illustrator and artist who has recently completed projects for Marvel and Boom! Studio’s Joyride.