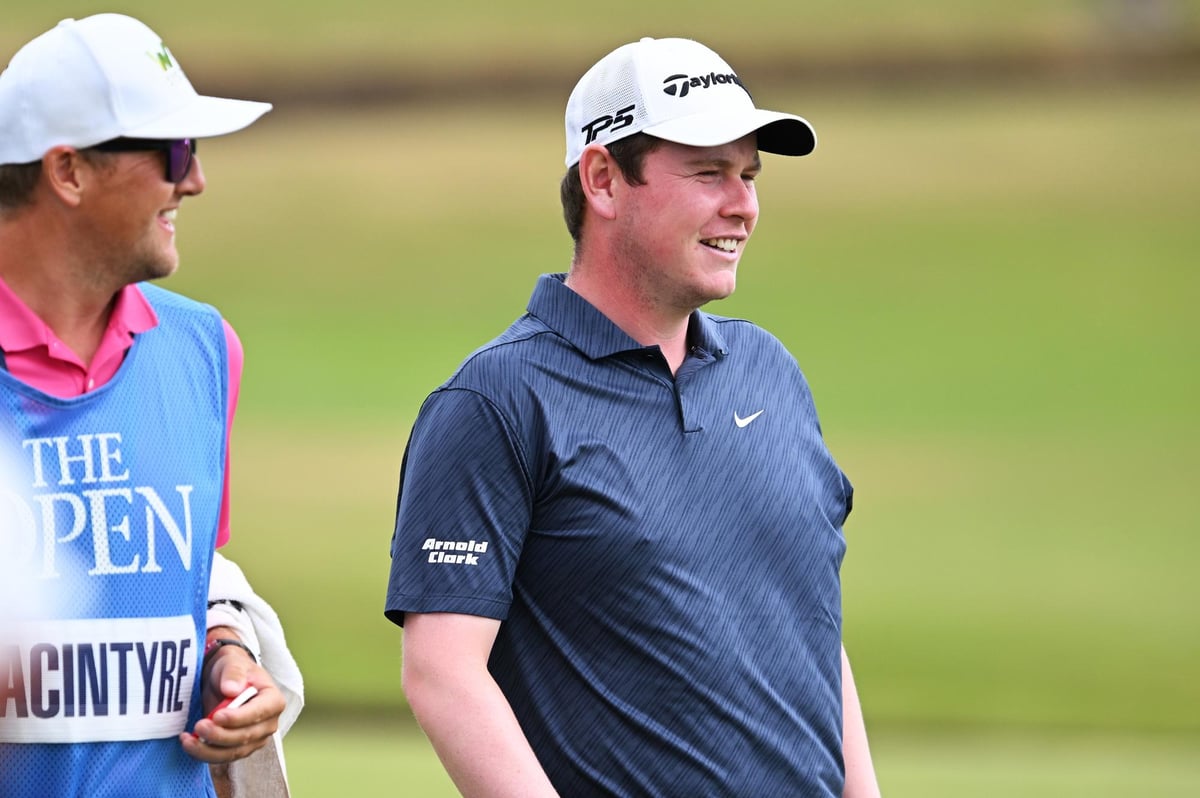 “That’s the goal,” admitted the Oban man as he prepared for the most-exciting chapter yet in his Claret Jug career, having finished in the top 10 at both Royal Portrush and Royal St George’s in two previous appearances.

MacIntyre, one of three Scots in the field, not only lit up the DP World Tour in his rookie season in 2019 with some brilliant golf but also due to the fact he became a highly-popular figure among his more experienced peers.

The 25-year-old is well aware himself, though, that he’s not been the cheeriest of chaps for a little while now and that has coincided with hitting his first bump in the road, having recently slipped out of the world’s top 100.

Bob MacIntyre with his caddie Mikey Thomson during a practice round on the Old Course at St Andrews ahead of the 150th Open. Picture: Ian Rutherford/Alamy Live News.

“It’s something that, since I’ve come back from Covid, I lose my head too quickly,” he said. “I think that’s been the main problem with why I’ve not been performing the way I’ve wanted to this year.”

In tandem with caddie Mike Thomson, MacIntyre is determined to use the season’s final major to put an end to some people starting to worry that he’s become ‘Mr Grumpy’ when, in actual fact, nothing could really be further from the truth.

“As much as I might get annoyed, it’s just going to be, ‘oh, well, we’ll just deal with what’s next’. There’s ways around it. There’s ways to fix it. Good golf normally takes care of that.”

Bob MacIntyre talks to the media during his press conference at the 150th Open at St Andrews. Picture: Tom Russo/National World.

More of what he’s produced on this stage so far and there’s no reason why the left-hander can’t give himself a chance of seeing his ultimate golfing dream come true.

“Yeah, I have,” he admitted to being asked about following in the footsteps of some of the golfing greats by claiming the Claret Jug at the home of golf. “I’ve had that dream since I was a wee boy.

“When I was driving in on Sunday, that’s the first time I’ve ever had goosebumps coming to St Andrews. I always drove into town and it’s like, ‘oh, we’re in St Andrews’. But when I came in from above the town and I had the music on, I actually had goosebumps.

“I was like, ‘wow, this is different’. If I was ever to play just one Open Championship, it would have been here. I’ve not had the best of times here, but it’s just different. The Open Championship is the biggest golf tournament that you can play in.”

Even more so on this occasion. “I think everything – even in the players’ lounge – is just taking a bigger step forward,” he added of the impressive infrastructure in place for the showpiece occasion.

While MacIntyre played on the Old Course as an amateur in the St Andrews Links Trophy and has added to that experience in the Alfred Dunhill Links Championship, this week’s test is something different.

“I’ve never seen it the way it is now, firm and fast. It’s only going to get firmer, which is a good thing. And it’s its defence,” he said.

“We’ve played it in Dunhill and stuff, and I thought The Old Course was relatively flat. This week I’m seeing slopes and the ball moving that I never thought was possible. But it’s the way The Old Course was designed to be played.

“When we turned up here on Sunday, we played five out, five in. The first was slightly down wind. I was like ‘what would you hit here, Mike?’ He was, like, 3-iron. Hit 3-iron, pulled it slightly. I hit another one straight down the middle. I get down there, the first one was down at the bottom. Second was over 300 yards with a 3-iron. I’m, like, ‘this isn’t the way we know it’.

“I’ve played here so many times now, and I remember we used to throw balls at the pins and it would stop when I played amateur stuff, played the Dunhill. Now this week if you’re in the rough, you can’t throw onto the green.

“It’s going to be a lot more feel, a lot more imagination going into this week. Especially if they start tucking pins, then you’ve got to really create angles to get near them.”

As will be the case when Paul Lawrie hits the opening shot at 6.35am and also David Law when he makes his major debut later in the day, MacIntyre will have an army of home fans willing him on at the Fife venue.

“I’m probably going to be a wee bit more anxious, a wee bit more nervous at the start,” he said. “Once I get into it and after I play the first couple of holes, I’m playing golf. I’m competing for the biggest tournament in the world. That’s why everyone’s here. And it’s on a special golf course.

“I’ve just got to put everything to the side, and hopefully it’s going to be a memorable one. I think this week’s a new opportunity for me. Again, it’s the biggest golf tournament in the world. Who can’t be excited about this?”