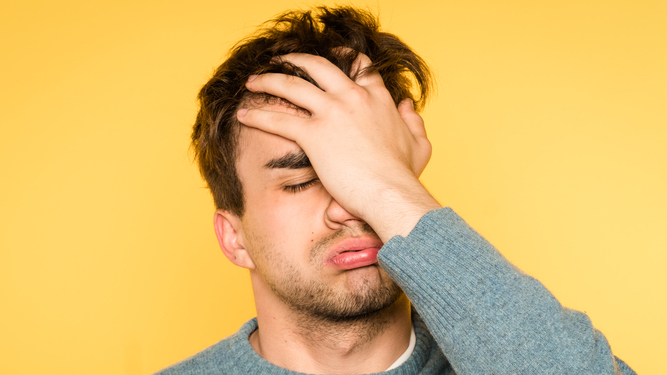 SOME moments are so embarrassing that the memory of them pops up on shuffle every few days. Here are some low points in your life you’ll be made to relive.

Expectations weren’t high, but it may have descended into a panicked farce of condoms falling off and impotence. Despite it being many years and relationships ago, the memory will replay itself with the slightest trigger, eg. dunking a biscuit in your tea and it going floppy.

Vomiting in your friend’s parents’ car

A lift from your mate’s dad after underage beers resulted in you launching a volcano of vomit into the footwell. Now your mate always treats you to a full recap of how you spewed in the Volvo and begged ‘Please don’t tell my mum’. Your mate’s dad Lionel doesn’t laugh it off these days either, he still seems pretty f**ked off 25 years later.

The world can be split into two camps – people who have grown into normal members of society, and losers who did this. As a small child you accidentally called Mrs Lewis ‘Mum’, causing uproar in the classroom. You might’ve been cool with your Power Rangers lunch box but no longer. Goodbye innocence and welcome to the real world. It’s cruel as f**k.

You know this. You really do. They interviewed you. You see them every day. But when someone asks for an introduction OH GOD YOU’VE DRAWN A COMPLETE F**KING BLANK ON THEIR NAME. Is it Keith? Jeremy? Mark? The Rock? Scooby? Bang goes your career. You’ll never, ever live this down, even if the universe implodes leaving nothing but an infinite, timeless void.

Being rejected by someone way out of your league

Head-over-heels mutual true love only happens in movies. Your love life has been a series of compromises and misfires, including someone you adored saying a polite ‘Thanks, but no thanks’. They could at least have laughed as if it was a totally ridiculous suggestion* because then you could just hate them.