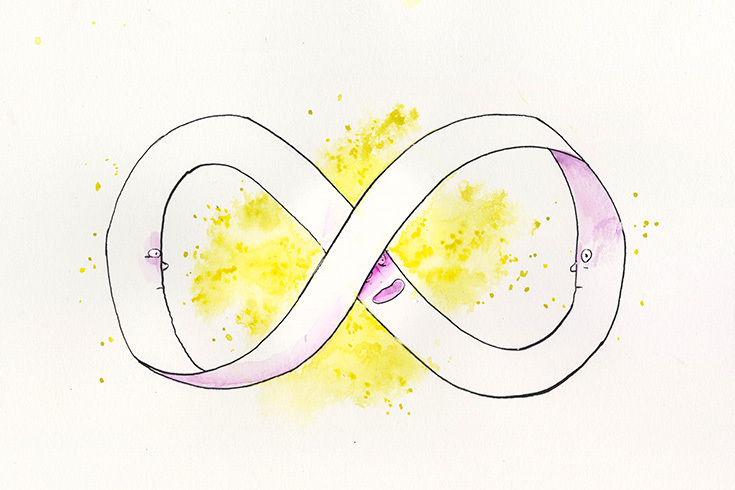 This past summer, I came down with my third case of COVID-19, only eighteen days after my second. Once I updated colleagues and a few close contacts, I shared the news on Twitter, illustrating what I’d learned—that recent illness is currently no guarantee of future immunity and that both infections followed my participation at unmasked gatherings (part of the widespread reopening of Ontario, where I live). The post was unexpectedly controversial, garnering thousands of replies over the next few days.

As is often the case when you talk about COVID-19, the responses reflected a range of perspectives. There were people who had barely felt safe leaving the house over the past couple of years, people ready to move on from COVID-19, and even people who think the pandemic is a hoax. One guy, who claimed he was double vaxed and had spent his summer maskless at large events, including a BC Lions game, said he got the coronavirus only once and didn’t see what the fuss was about. I was tempted to congratulate him on his summer, which sounded a lot more fun than mine, and (perhaps futilely) to encourage him to get that first booster shot more than half of Canadians have yet to receive.

I’m not in the habit of getting into fights online, and while it was discomfiting to be called a “sheep” for being vaccinated, I controlled my urge to fact-check some of the trolling—the discussion soon stopped being about me anyway. What began to emerge was just how different everyone’s experiences with COVID-19 have been. Many of the responses showed a genuine lack of knowledge about COVID-19, what vaccination can do, the difference between a PCR and a rapid test, and why masks work. Some commenters claimed vaccines reduce the body’s immunity, even though they literally do the opposite (my ability to write this letter while sick is probably thanks to my vaccines and booster shot). However much we talk about COVID-19—The Walrus alone has published dozens of features on the pandemic since 2020—it’s still not enough. The facts are not getting through.

A number of stories in this issue do exactly that—strike a tone both educational and engaging—on a range of subjects. Matthew Braga’s investigation into the enduring appeal of childhood classics such as the Rubik’s Cube, the Etch A Sketch, and Play-Doh isn’t just a report on the fortunes of the toy industry; his transporting feature, “Survival of the Funnest,” explores the joy and power of play. One of the story’s most insightful lessons is how much influence adults have in sharing their favourite toys with kids. We learn from one another, even in the fun we share.

Ainslie Cruickshank’s story is actually about education: in “Climate in the Classroom,” the BC-based writer discusses the implications of oil-and-gas companies providing lesson plans for teachers. As her reporting finds, the way kids learn about a topic like the climate crisis frames their understanding of it and also affects the likelihood that they’ll feel positioned to do something.

Whether it’s school walkouts by teens in solidarity with climate activists like Greta Thunberg or the disrupting of political rallies via TikTok, young people have demonstrated over the past few years that it’s a mistake to underestimate them. Wondering what they might do with a platform like The Walrus inspired us to create a space for their voices. Our new online series for teens, which received over 100 submissions, explores issues that range from whether the voting age should be lowered to the effects of pandemic lockdowns on education. A short story, “The Gate of Heavenly Peace,” by seventeen-year-old writer Yan Xi Li, appears in this issue. We hope the exchange provides something for us all to learn from, now and in months to come.

Graham Roumieu (roumieu.com) is a National Magazine Award winner and a regular contributor to The Walrus. He draws for The Atlantic, the New York Times, and the Wall Street Journal.

I have been devouring The Walrus’s Summer Reading issue and remarking on the quality of all of the contributions from our former and current Fellows. It reminds me that every issue of The Walrus is a culmination of the efforts (including lengthy fact-checking) of the editorial team, the emerging journalists they train, and the generous supporters who make all of this happen.

Through The Walrus Editorial Fellowship Program, we have the privilege of training the next generation of professionals who are passionate about the integrity of journalism. In the Summer Reading issue, 2021 Cannonbury Fellow Connor Garel wrote a piece on Frankie Perez and the art of breaking. Tajja Isen contributed an excerpt from her first book, Some of My Best Friends. Isen, who also began her career at The Walrus as a Cannonbury Fellow, is currently Editor-in-Chief at Catapult magazine.

Our 2022 Chawkers Fellow, Mashal Butt, was instrumental in making sure we got the facts straight in our Summer Reading issue, having fact-checked six features, including Sarah Totton’s short story “The Click.” And in our September/October issue, you can read a cover story on housing affordability by our 2022 Justice Fund Writer in Residence, Julia-Simone Rutgers. (Rutgers is now a climate reporter for The Narwhal.)

Donations of any amount (great or small) mean that we can keep on training future journalists in the rigorous practice of fact-checking and editing. With your support, we can continue to keep The Walrus available to readers everywhere as well as help build the next generation of reporters, copy-editors, fact-checkers, and editors.