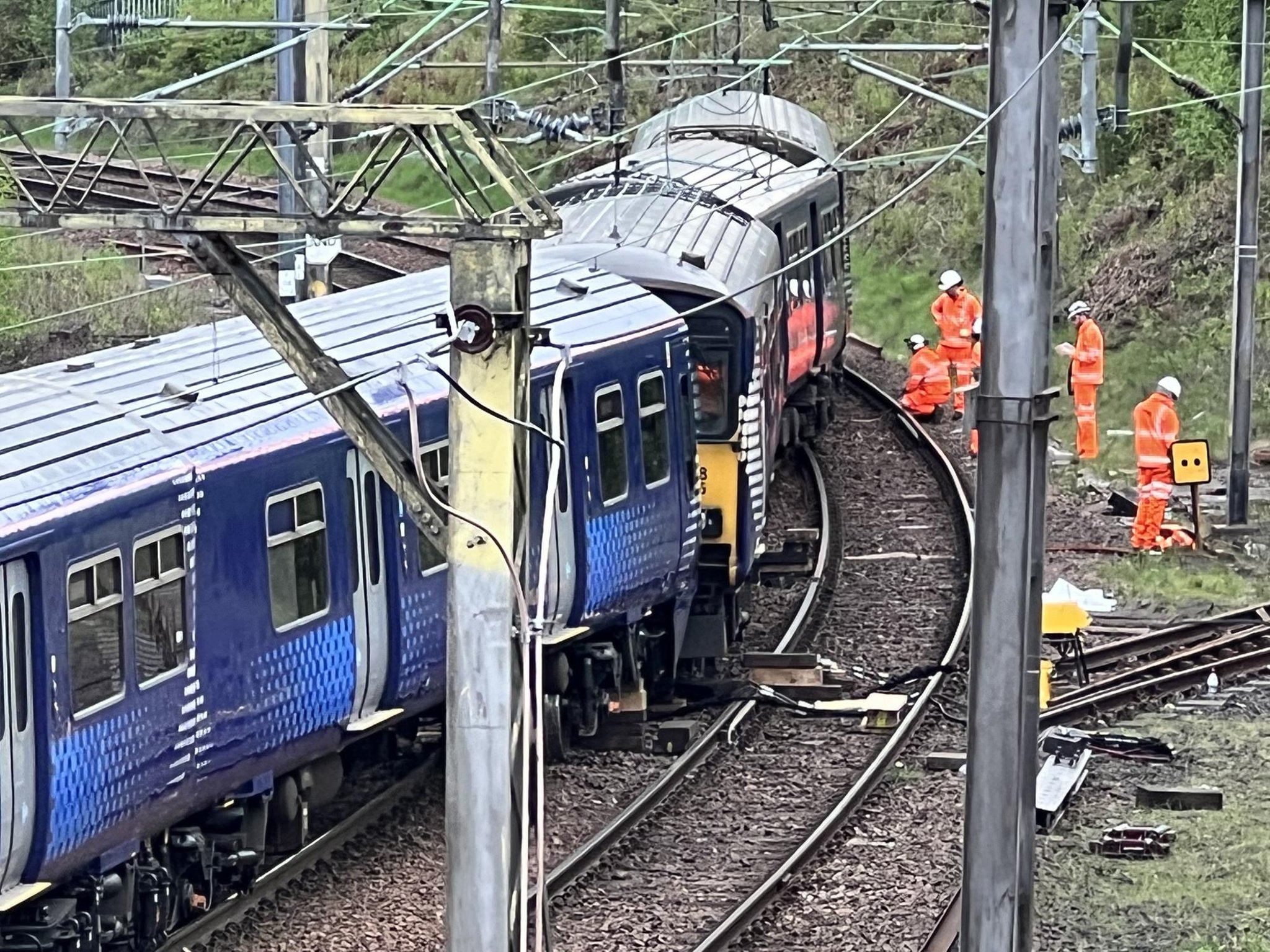 The operator said it was experiencing “substantial train crew shortages” from the disruption and Covid.

More than 250 services across the Central Belt will be fully or partly cancelled on Saturday and Sunday after an empty ScotRail train came off the tracks at Coatbridge on a secondary Glasgow-Edinburgh line via Bathgate late on Friday.

A further 70 more trains have been cancelled on Sunday because of many drivers not volunteering for overtime, on which Sunday trains depend.

These include on routes including Edinburgh to Glasgow via Falkirk High, Aberdeen, Glenrothes, Inverness, Dunblane, North Berwick and Tweedbank.

Some services will also be halted on lines from Glasgow to Alloa, Ayr, Cumbernauld, East Kilbride, Lanark, Largs, Paisley Canal and Shotts.

The disruption has led to ScotRail announcing an emergency timetable on its North Clyde routes across Glasgow to Helensburgh, Balloch and Milngavie.

This comes on top of the other east-west line through Glasgow, via Glasgow Central and Exhibition Centre, remaining closed for long-running engineering until Monday.

ScotRail said: “This plan has been implemented to improve overall reliability and to avoid sporadic cancellations.”

The derailment involved wheels on five carriages of the six-carriage train coming off the rails as it passed a set of points at a junction at Coatbridge Sunnyside while being moved from the Yoker depot in Glasgow and Bathgate.

ScotRail said it would cause disruption until the end of Sunday, with no trains running between Shettleston in Glasgow and Bathgate.

The line at Coatbridge is expected to stay shut until the end of Sunday. Picture: Donald Stirling

Replacement buses are operating between Shettleston and Bathgate, calling at all stations.

However, passengers travelling between Edinburgh and Glasgow are urged to use the main route via Falkirk High.

ScotRail said the cause of the incident remained unclear but the train had been travelling at a “very low speed”.

Wheels of five of the six carriages came off the tracks in the derailment. Picture: Donald Stirling

ScotRail service delivery director David Simpson said: “We’re sorry to customers who are experiencing disruption to their journey as a result of this incident.

“Engineers are on site and working round the clock to get the train back on the tracks and return services to normal as quickly as possible.

“However, we’re expecting some disruption for the remainder of the weekend.”

Mr Simpson added: “We are expecting a driver shortage over the coming days, which means some services will be cancelled.

“Customers are asked to check their journey before travelling by downloading the ScotRail app or visiting scotrail.co.uk.

“We are reliant on drivers working overtime – known as rest day working – because of delays to training new drivers caused by the pandemic.

“Unfortunately, since the drivers’ union Aslef announced its intention to recommend a ballot for strike action after receiving an offer of a 2.2 per cent pay increase, a significant number of drivers have declined to make themselves available for overtime/rest day working.”

An Aslef spokesperson said: “Scotland’s railways should not be ‘reliant’ on overtime.

“The decades of failed workforce planning must end now.

“Aslef have long called for a driver apprenticeship scheme in Scotland similar to the successful approach in Wales.

“Rather than attacking their staff, ScotRail management should come back with a fair pay offer negotiated through the appropriate channels rather than via social media, and a strategy to ensure our railway has a long term recruitment plan.”