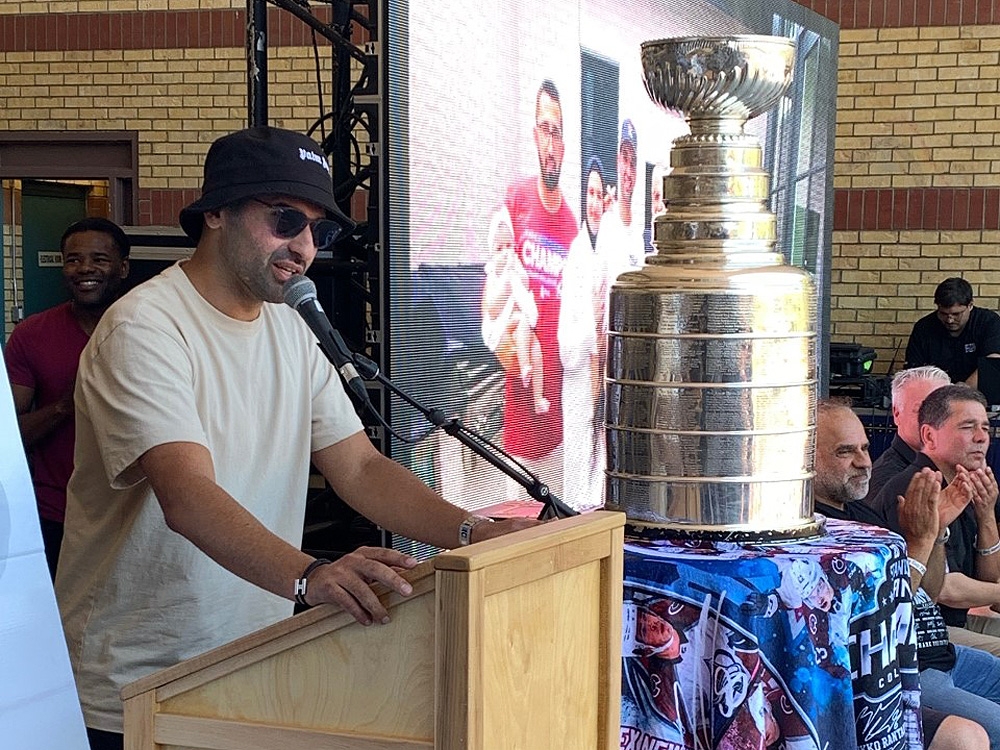 Almost 55 years after he emigrated here from Lebanon, his namesake grandson brought the Stanley Cup to the prayer room of the family’s London Muslim Mosque, the first Muslin to win it, raising it above hundreds of worshippers outside, many in Colorado Avalanche, Toronto Maple Leafs and Calgary Flames sweaters.

“The mosque is part of who I am,” Kadri said of choosing to start his eventful day with the Cup there. “I think the community deserves it and they’ve been cheering me on a long time.”

Lebanese flags waved amid the Canadian leaf and many young women in hijabs were part of the motorcade that noisily preceded the Kadri clan in a vintage London fire truck to the main celebration at Victoria Park.

“This is incredible, a dream come true,” Kadri said after Mayor Ed Holder gave him the key to the city. Kadri’s minor hockey coach also spoke, followed by his two junior mentors with the Knights, Dale and Mark Hunter.

“I wanted to share it with all you guys,” Kadri said. “I’m hoping this inspires kids to pursue their dreams. I had great support and seeing all of you come out just motivates me more.

“We’re going to try and run this thing back and I’m going to Calgary to get the job done.”

The joy, however, was mixed with a few solemn observations at the mosque.

“It was only a year ago we suffered a tremendous tragedy, loss and suffering,” Dr. Hassan Mostafa, director of the Nazem Kadri Foundation had reminded Breakfast Television on Friday. “It’s still there in London and with Muslims across Canada.”

On June 6, 2021, Salman Afzaal, wife Madiha, 15-year-old daughter Yumnah, her 9-year-old brother and 74-year-old grandmother, Talat Afzaal, were on an evening stroll when they were run over by a truck. Nathan Veltman, aged 20 at the time, faces four counts of first-degree murder and one of attempted murder in what prosecutors allege was an act of terrorism. The youngest child survived.

“A year later, to have a celebration for one of our own, to reach these heights by winning the Cup … what’s more Canadian (than that)?,” Mostofa asked. “For Nazem to bring the Cup to us, it really helps that healing and allows Muslims who felt disenfranchised and those who have fear sometimes (just) going outside.

“Kids in the playground, it gives them a lot more confidence in their identity that a fellow Muslim has won the Cup. Thirteen years ago we drove to the NHL draft in Montreal. His dad, his uncles and I joked: ‘Wouldn’t it be amazing if Nazem won a Cup and he could bring it to the mosque?’

“Kudos to Nazem and his family, they really have pride in their religion, their heritage, their community.”
Many made the connection on Saturday that the different ethnicities represented in the crowds, many of them in local hockey jerseys, was a direct influence of the youngest Kadri.

“That’s the goal at the end of the day, just to inspire,” he said. “I have kids myself and I know the young generation is looking for role models.”

The Afzaal family had also attended the same mosque.

“That’s an important part of today, especially with Islamophobia in this day and age, Kadri’s father Sam said.
“We just wanted to connect and say ‘listen, we’re no different than anybody. We have the same concerns, commitment and we all work hard in our community to make it better.

“We need to get rid of that ignorance.”

LONDON, Ont. — This might be as close to a Stanley Cup parade as the Maple Leafs get in the foreseeable future — or the start of a few more that are Flames’ flavoured.

The silver trophy sparkled in the summer sun on Saturday, surrounded by cheering fans in Leafs sweaters with a former Toronto first-round draft pick raising it along the route.

But Nazem Kadri won this as a Colorado Avalanche and is now a Calgary Flame for the next seven years. The Leafs were featured prominently in a Kadri career video played at the Victoria Park bandshell. But blue and white supporters must be content that Kadri brought it back to Toronto for just a few hours on Saturday night for a party that was to include a few ex-teammates.

For nine seasons — five out of the playoffs, four in, most of the latter marked by his suspensions in pursuit of trying to be aggressive at crunch time — Kadri bled blue. Now he’s a Flame and more than one speaker on Saturday predicted he’d soon head up another parade wearing a cowboy hat.

“It is what it is,” Kadri said of the Leafs after signing many Toronto sweaters and a girl’s homemade sign that read ‘Leafs Nation Misses You’.

“At the end of the day, that wasn’t my decision (to leave via a 2019 trade). Regardless of who takes a chance on me, I’m going to give them everything I have. I have great Toronto supporters and that’s never going to change.

“I won’t spill the beans (on which Leafs he’d be meeting) for their sake, but it will be quite the celebration.”
He becomes another prominent former Leaf in the past few years to win the Cup elsewhere, joining Phil Kessel and Tyler Bozak. Kadri’s father, Sam, who introduced him to hockey and was with him at the start of his career when Bell Centre fans in Montreal booed his selection, came on a few father-son trips with the Leafs and knew team management and coaches intimately.

“A big part of me (wishes he’d won as a Leaf),” the elder Kadri said of a 55-year drought. “If my son is ever no longer playing in the NHL, I’d love for the Leafs to win it.”

A more mature Nazem, now a husband and father, played 16 playoff games last spring alone after a career regular season in Colorado, missing a few because of a thumb injury that was supposed to have sidelined him six weeks.

He was back in two weeks with the overtime winner to put the Avs up 3-1 on Tampa Bay in the final.

“He’s had a journey,” Sam said. “Like anything in life, you persevere, work hard … and the results are a Stanley Cup.”