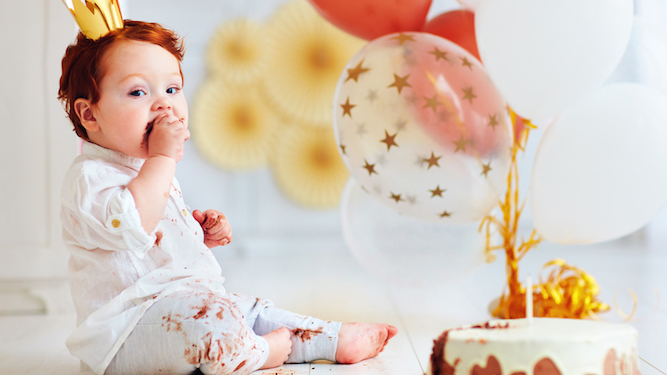 HAVING a child famously costs an absolute packet. Here are five eye-wateringly expensive purchases the ungrateful little shit won’t ever know you made.

With some of them coming in at around a grand, prams ain’t cheap. That said, your child will use it a lot. They’ll cry, snot, vomit and crap all over it. What they won’t do is remember ever having had it. They’ll grow out of it and you’ll sell it to a tight woman on Facebook marketplace who haggles you down to £30. Money well spent.

Considering the mess, it would make sense to dress your spawn in cheap, identical sacks until they’re, say, 18. But society says no. Instead you spend a fortune on clothes from Next for a creature that never, ever stops growing. Within weeks the clothes are obsolete. The stores could at least sell clothes in ‘baby shit brown’ or ‘milk puke yellow’ to mask the stains. But they don’t. Con artists.

An event which fills guests with dread. Yes, it’s a colossal waste of time for everyone involved. The cake, the balloon arch, the catering, the presents, the entertainment. All for a child with a brain too stunted to remember or appreciate it. You might as well sing Happy Birthday to a baked potato.

The ‘next to me’ cot

Back in the olden days, babies were tough. Parents shook their hand on the way out, said ‘Best of luck’ and that was that. Now you must have this expensive contraption which means you’re never more than an inch away from a baby screaming in your face at 1am. And 2am and 2.15am. Then suddenly they’re too old for it, but don’t worry – there’ll be something new to bankrupt yourself with.

As your baby is officially the cutest one ever born, you’ll need professional photos. Cue baby behaving like a total knob the entire time. Or sleeping through it. These tedious pictures usually end up on a USB stick you misplaced several years ago. But don’t worry, you had a photo book made up. One that’s currently getting irreparable water damage in the loft.