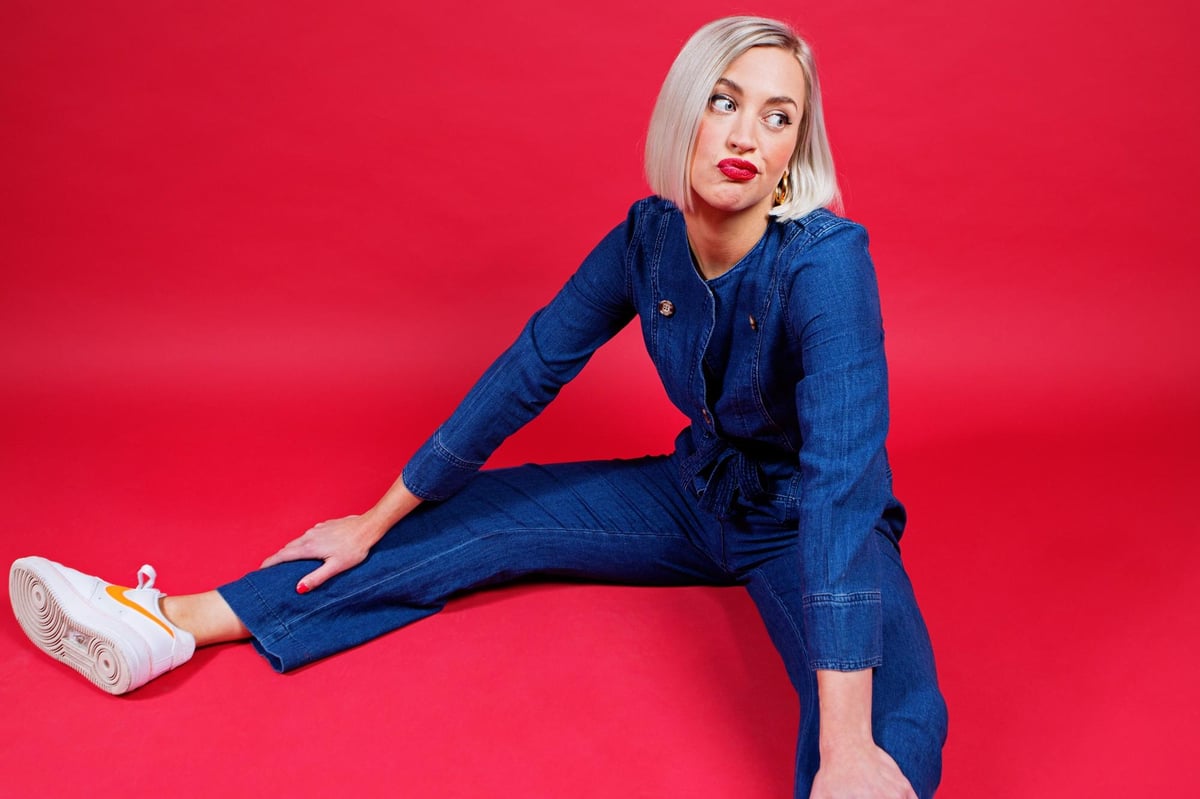 Reclaiming “smut” from its dismissive and pornographic connotations, Lily Phillips’s debut stand-up show is a bracing burst of body positivity informed by a woman’s world-weary experience of men. A former dancer, Disney Princess impersonator and fish and chip shop mermaid model no less, Phillips is accustomed to being the focus of the male gaze. So she’s using her current platform to “humanise” women’s bodily processes, reflecting on sex, menstruation and excretion with unsparing openness while eschewing lecture, finding the ribald funny in the vagina and the attendant knowledge gap surrounding it.

Her inspirations in this endeavour are initially dubious, Britney Spears having an extended breakdown on social media, and her cocker spaniel, whose periods sync with her own, much to her boyfriend’s chagrin. She shares the cautionary tale of a woman who couldn’t dispose of her excrement while on a date, which turns on a lack of male gallantry. And her own experience of being caught short outside, observed by baffled wildlife, part of a growing zoological theme that entertainingly casts human behaviour within the quirks and kinks of the animal kingdom. Sardonic but engaged and engaging, on a mission yet casually conversational, Phillips is in danger of giving smut a good name.

Don’t let Ali Woods’ relative youth, reputation as a TikTok sensation, and laddish, cocksure delivery fool you. Best Friend Ever is an important show about male mental health, friendship and conversation, as well as a compelling debut hour of stand-up. Although his Scottish mother’s legacy emotion is anger, Woods was raised in the time-honoured British tradition of deflection and joking about your problems. Or worse, dismissing them as “gay”.

After some social observations and personal introduction to his place in the realm of repressed, toxic masculinity, he gets into the meat of his narrative: his relationship with his two best friends, and chiefly, the depression of his friend Dan as they were cooped up together over lockdown. Although he keeps the mood light, Woods is pretty unequivocal in suggesting he was on extended suicide watch for his mate, his altruism offset by the petty selfishness he constantly allows to peek through his concern, conveyed with cheeky charm and in animated act-outs. So focused was he on his friend that the comic took his eye off the ball elsewhere, and he persuasively closes his show with an appeal for every man to talk about their feelings. And their penises.

Vittorio Angelone’s debut hour is a knowing take on Fringe stand-up tradition, cynically dismissive of introducing sad events at the 40-minute mark in order to scoop an award, but also structurally overwrought. Hailing from Belfast and Italian stock, he’s genial and charming, effortlessly mining his backstory for consistent laughs. But he also has the grit of some youthful wobbles with his mental health, linked in no small part to being an Ulsterman living abroad in London.

There’s a devilish side to Angelone that prompts him to push buttons and poke sensibilities, sometimes gratuitously and to his detriment, but generally refreshingly, and borne out of a pioneering spirit to find the line of offence. A routine on sexual consent in relation to sleepwalking and sleeptalking, for example, entertainingly balances filth with intellectual curiosity. And where that instinct and his intelligence come together best is when he confronts the English for their lack of self-awareness, an informed, angry punch upwards from the colonised. The pity is that having used Brian Friel’s great Hiberno-Anglo culture-clash play Translations as his jumping-off point, he leans on it too heavily as a framing device, his self-deprecating mockery of his own chippy pretension not enough to prevent it stealing momentum from otherwise strong routines.

Though contemptuous of fish that bite on a baitless hook, Pierre Novellie entices the reviewer by suggesting he perceives life as full of things that are merely alright. Six out of ten. Three stars. Bait set, he then delivers a storming hour of punchy, exceptional stand-up, tacitly daring the critic to dismiss him with such blandly average small fry.

Ostensibly a maroon, velvet jacket-wearing snob, who speaks like a jaded political scientist in sweeping and withering terms about the “Public”, to be encountered only for their random insanity and anecdotes they provide, Novellie accordingly keeps to arthouse cinemas and reacts with alarm when the riff-raff invade his sanctitude of joyless self-affirmation. His disdain has actually little to do with external phenomena, horrified as he is by meal-deal sandwiches, and everything to do with keeping his incessant internal angst at bay. A hugely compelling early story recounts him trying to enjoy The Play That Goes Wrong while a fellow theatregoer disrupts the performance, with Novellie at pains to convey his appreciation of the hit show while greater farce unfolds around him.

That’s not to say he doesn’t experience moments of Zen-like calm. Or rather, masculine mental emptiness or ferocious focus on the trivial. His musing on the contents of fish blood, much to the chagrin of his exasperated ex-girlfriend, is the jumping-off point for a succession of tremendous observational routines. There’s a hilarious denunciation of the ego-fuelled insensitivity of Charles Dickens and a brilliant deconstruction of the perverse mindset behind finishing everything on your plate once reminded of starving Africans, with Novellie’s incredulity garnished with delightfully pithy turns of phrase. Ultimately, too, there’s a moment of self-insight for the comic that puts his apparently disparate, wide-ranging show into context. Satisfying for the narrative, more of a mixed blessing for him.

Christopher Macarthur-Boyd is an instantly engaging presence at the mic. But you see why he’d be easy prey for a belligerent Covid conspiracist, berating him for masking up in a train station. Small and bespectacled, the Glaswegian comic wears his beta male status on his sleeve, alongside his naff tattoo. And though he resists being branded a conformist “sheep” with a droll comeback (after the confrontation), his wisdom is invariably hard won and shared with the taut smile of the working-class underdog.

Oh No is an enjoyable reflection on the struggles of lockdown, when Macarthur-Boyd temporarily lost his livelihood and sense of self. His great talent is the unshowy, almost casual way he relates his mental health problems, in witty asides that are organically drawn out into relatable anguish, but which never overwhelm a breezy hour that capably leavens the bleakness with wry good humour. Leaning heavily on a thuggish growl he’s internalised to represent, at various times, his more frugal grandfather or simply the threat of Scottish male violence, Macarthur-Boyd illustrates his observations with deft act-outs, amusingly assuming the persona of a blushing Southern belle when rival food delivery companies compete for his attention.

From the great tradition of medics turned comics, via the even more established line of British-Nigerians destined to become junior doctors, Michael Akadiri’s scurrilous debut enhances the NHS’s reputation almost in spite of himself. Many physicians have a “nil by arse” anecdote concerning foreign objects stuck in backsides. But Akadiri’s introduction shares his personal indignation in this area, setting the tone for a consistently funny, routinely dark stand-up show that also discloses the “ash for cash” profit incentive of working with dying geriatrics.

Breezily assured at the mic to the point of swaggering, he has a quirk of quoting song lyrics, seeking 8pm clapping for his slightly tuneless singing. Elsewhere, he marvels at the 17-year-old American man who became a practising gynaecologist with zero qualifications, effectively championing the NHS through contrast with the exploitative chicanery of US medicine. However, for all his cocky wit, appealingly cynical front and Pussycat Dolls knowledge, Akadiri is insecure. Dictated to by a wife in the same profession, scarred from facing charges of malpractice, questioning the racial and class aspects of who society perceives as lifesavers, No Scrubs is a welcome dispatch from frontline healthcare that educates as well as entertains. But mostly just entertains.