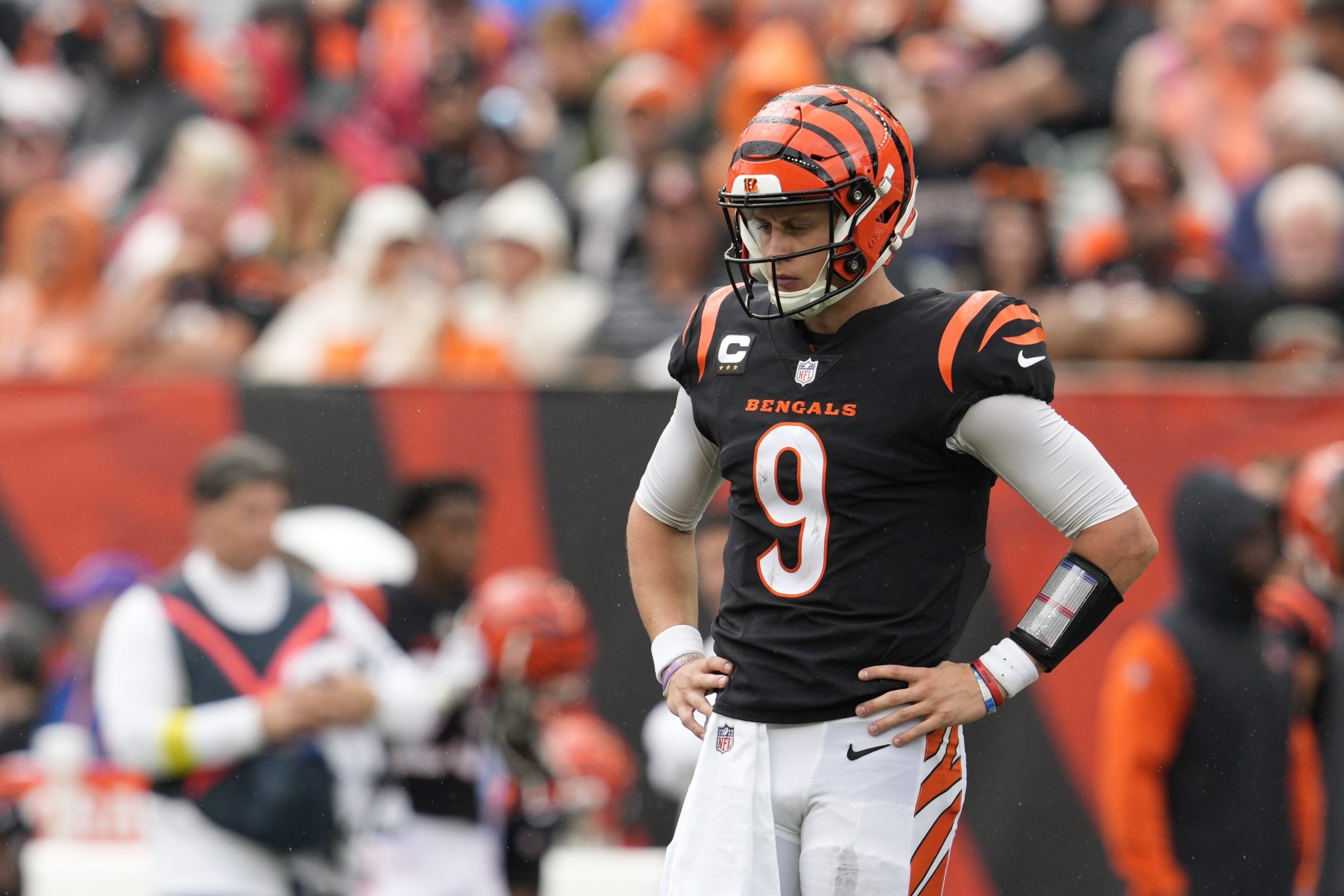 Still think it doesn’t matter if star NFL players play little, or not at all, in the pre-season? Don’t be surprised if Sunday was the beginning of the end of that trend.

It was that kind of day on the NFL’s curtain-raising Sunday — which produced more funny hiccups than a class of pre-schoolers all guzzling ice-cold pop at recess.

If you were continually switching between games all afternoon and early evening, or just watching the Red Zone channel, you saw Week 1 of the league’s regular season kick off in earnest with some of the sloppiest offensive stumbles, and most embarrassing kick-team bumbles, we’ve seen in some time.

To start with, Sunday’s games were rife with quarterbacks (a) as green as May grass, or (b) playing on a new team, or (c) learning a new offence. Most of them, and additionally nearly all veteran stars to boot, were taking either their first in-game snaps of the year, or more than just a handful of token pre-season snaps since last season.

And, boy, did it show. Especially early on. We’ll get to Burrow’s unmatched opening-day blunders in a moment. There were also these:

The sub-standard play out of the gates wasn’t limited to the passers:

As well, there were a slew of dropped easy passes in game after game (especially by Goff’s Lions receivers), embarrassing missed tackles, blown big leads, and strange play-calling by coaches.

Yes, many of the above players — passers included — got their shoot together eventually. But the slow starts were costly.

All of which seemed to be summarized, and concentrated, in the wild Bengals-Steelers game.

SAY IT AIN’T SO, SUPER JOE

Late last season, the Cincinnati Bengals somehow kept winning right up to Super Bowl LVI, despite Joe Burrow getting sacked all the time. Like, all the time.

On Sunday, to kick off their AFC championship defence, the Bengals overcame an early 17-3 deficit and actually should have beaten the Pittsburgh Steelers, despite Burrow turning the ball over all the time. Five times to be precise, on four interceptions and a lost fumble.

As it was, the Steelers improbably blocked what would have been a game-winning Cincinnati extra-point kick with two seconds left in regulation, then survived missed field-goal attempts by both teams in overtime — the Bengals’ because their backup snapper’s slow-speed hikes messed up kicker Evan McPherson’s timing, the Steelers’ because Chris Boswell doinked a 58-yarder off the left upright — before Pittsburgh won 23-20 at game’s end, thanks to a successful 53-yard field goal from Boswell.

Burrow’s first pass of 2022 was a pick-six by Steelers safety Minkah Fitzpatrick. Before the first quarter was over Burrow was intercepted again (which was nullified by a Pittsburgh penalty) but almost immediately thereafter Burrow lost a fumble in the pocket.

Midway through the fourth quarter, Burrow was intercepted a fourth time.

Once Burrow got his act together, the Bengals offence mostly took over the game — at least until starting long snapper Clark Harris left in the fourth with a biceps injury. Harris on Friday had been listed as questionable to play.

When the Bengals tied the game at 20-20 with 0:02 left in regulation, McPherson seemingly was set to win the game for Cincinnati with an extra point, which NFL kickers make nearly 90% of the time.

But Clark’s snap was a little high, and a little slow. That allowed Pittsburgh safety Fitzpatrick to burst around the end, leap and block it.

With 3:37 left in the 10-minute extra session, McPherson had a chip-shot field goal attempt — a more than 90% likelihood he’d make the 29-yarder. But again Clark’s snap was a little high, and a little slow. It mucked up McPherson’s timing so much, he badly hooked his kick left of the uprights.

Then Mitchell Trubisky, in his first game as Steelers QB, ably drove Pittsburgh 45 yards to set up Boswell for his game-winning 53-yarder. Trubisky had completed 7-of-9 for 77 yards and a TD in helping stake the Steelers out to that 14-point lead.

For the record, Trubisky played in all three of Pittsburgh’s preseason games — taking 61 snaps in all. He did not look rusty early on on Sunday.

ROOKIE KICKER THE HERO FOR BROWNS

Back in April, when the Cleveland Browns used a fourth-round draft pick, 124th overall, on a placekicker — Cade York from LSU — there were chuckles. What was this vexed franchise doing, burning a middle-round pick on a KICKER?

But the Browns, and the 21-year-old York, got the last laugh on Sunday. At the end of his first NFL game he calmly drilled a 58-yard field goal to lift Browns to victory at Carolina, 26-24. York possesses a bazooka of a leg, as the kick probably would have been good from at least 65 yards, if not longer.

Tennessee’s offence is still broken. That was clear in a 21-20 last-minute loss to the New York Giants.

The Titans just can’t point to the absence of their best wide receiver of the past couple years, A.J. Brown, whom they traded to an ecstatic Philadelphia Eagles organization in April after reach a contract-extension impasse. (Brown had a game-high 10 catches for a game-high 155 yards for Philly on Sunday at Detroit.)

Whether it’s play-calling, the overall scheme, the inconsistency of QB Ryan Tannehill, or refusal to give the rock more to monster running back Derrick Henry, the Titans keep coming up small, offensively, in big games … Most games.

Credit to the Giants, though. New head coach Brian Daboll — only the second NFL head coach in history born in Canada (Welland, Ont.) — went for a two-pointer and possible win with 1:06 left, and got it, on a Daniel Jones to Saquon Barklely pass. That was the difference.

One offence that definitely did not struggle was Kansas City’s, in a 44-21 annihilation of Arizona. Chiefs QB Patrick Mahomes completed 30-of-39 for 360 yards and five TDs without a pick. Sheesh maybe he really won’t miss Tyreek Hill … Speaking of whom, Tua Tagovailoa hit on 23-of-33 for 270 yards and a TD in Miami’s 20-7 win over a New England team that was as meek offensively as it had shown throughout August. Tagovailoa connected with his new speedy WR, Hill, eight times for 94 yards … Lamar Jackson threw three TDs and ran for only 17 yards in Baltimore’s 24-9 win at the New York Jets … Carson Wentz, in his debut as Washington Commanders QB, was hot early and late in victory over Jacksonville, and that was enough despite being very Carson Wentzy for long stretches in between. He completed 11-of-15 for 123 yards and two TDs on Washington’s first two possessions, then threw two more TDs in the last 10 minutes … Brothers Amon-Ra St. Brown and Equanimeous St. Brown scored on touchdown catches within two minutes of one another, on the real-world clock — Amon-Ra for the Lions against Philly, Equanimeous for the Bears against San Fran.

John Kryk writes a weekly newsletter on NFL matters. That’s where you can first see his straight-up picks each week. You can have the newsletter automatically dropped into your email inbox on Wednesdays simply by signing up — for free — at https://torontosun.com/newsletters/