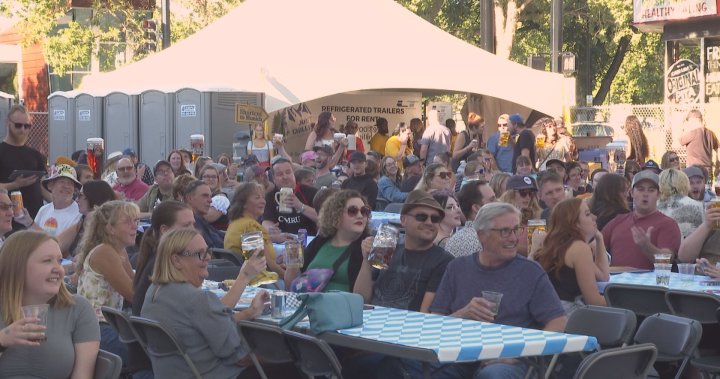 It’s a festival to celebrate beer, Bavarian culture and the end of summer. Oktoberfest has been a regular celebration in Lethbridge for more than a decade.

Over the last eight years, John and Roy Pogorzelski have hosted their own take on the event to sold-out crowds.

“It’s an absolutely amazing opportunity to gather people in the celebration of culture and arts and just being downtown and connecting with one another,” said Roy. He got the idea to host this event in southern Alberta after attending Oktoberfest in Munich in 2009.

“It’s a festival that’s been around for 200 years in Munich. When we come here, people are familiar with that and it brings that sense and feels of Europe and of being back in that culture,” said Roy. “What a great festival to throw here in Lethbridge, you know, to gather people around, sing the songs, have fun; I get to wear my lederhosen which is cool.”

According to the German Canadian Association of Alberta, people of German descent or a German-language background make up about 15 per cent of Alberta’s population and are the second largest ethnic group in the province.

Henning Muendel is one of many Germans who’ve settled in Alberta. He and his wife Bev have been regulars at Oktoberfest celebrations in Lethbridge and say they love supporting multicultural events.

“The dirndl I’m wearing is called the Rosen dirndl because it’s covered in roses and it’s from Bavaria,” said Bev.

“We just feel we can do our little bit, coming dressed like this, not in shorts, not in cutoffs and so on and dress up for the occasion,” added Henning.

Pretzels, bratwurst, beer and German music were abundant throughout the weekend as eventgoers wrapped up another Lethbridge summer with one last big celebration.