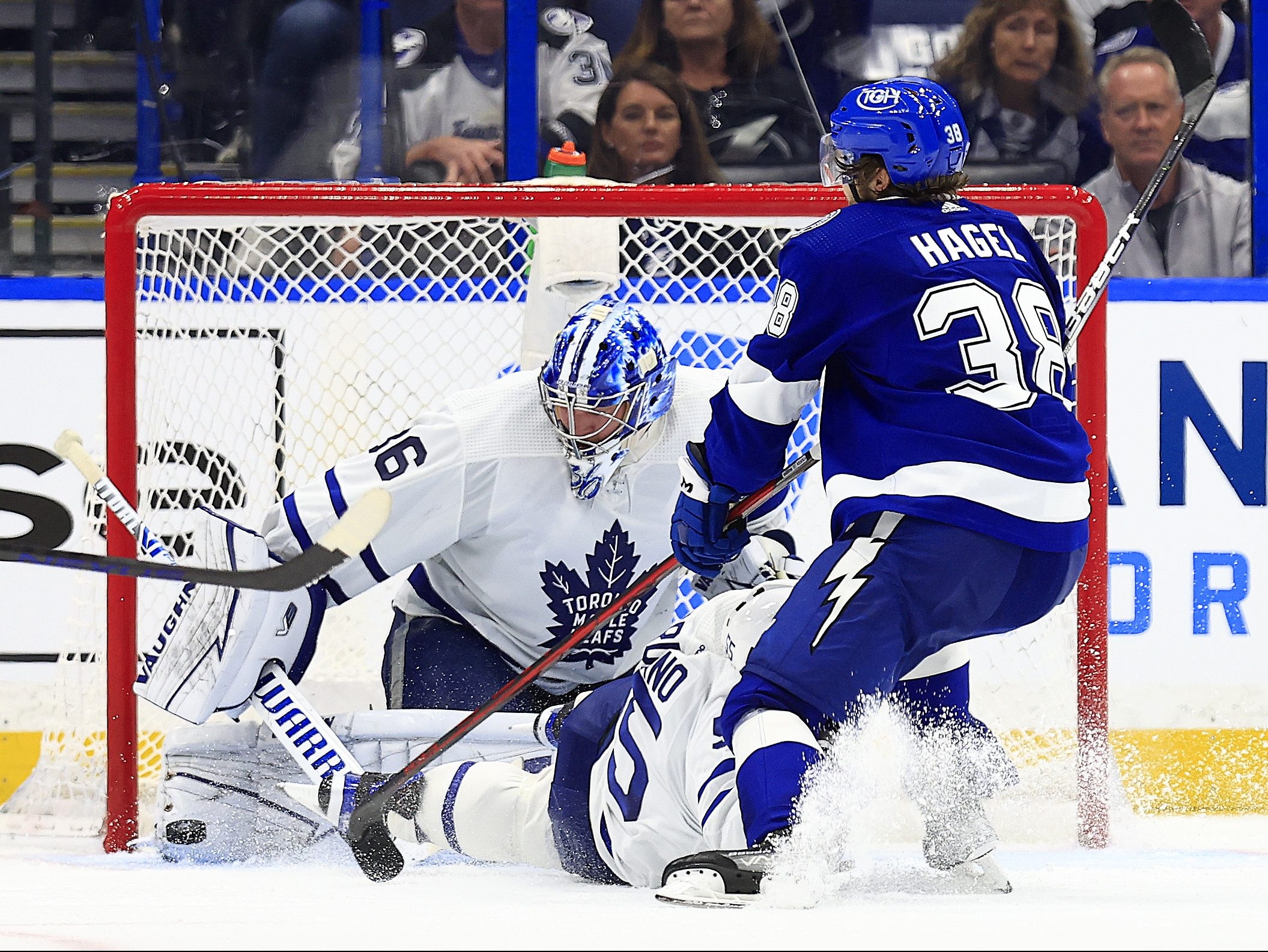 TAMPA — Jon Cooper gave the Maple Leafs plenty of kudos after Game 3, but Saturday was time to give his defending champions a little kick.

Trailing Toronto 2-1 in the series, the usually laid-back Lightning coach peppered his press conference with a few blunt observations about how his team got into this situation.

“We’ll bounce back,” he vowed of Sunday’s Game 4 at Amalie Arena. “We can’t go back and fix what happened last night (a 5-2 home loss). Tip your hat to them, turn the page, don’t look in the rear view mirror. That’s not our style. We know what we have to do.”

For one, get big guns such as Steven Stamkos and Nikita Kucherov to bury chances on Jack Campbell before any more talk that the Leafs goalie is getting the better of Andrei Vasilevskiy.

“We’ve scored seven goals on him the last two games,” Cooper noted. “So, if he’s considered to have a (3.5) goals against average every two-game set, we’ll take that.

“Has he made some saves? Sure. Have we beat him? We have.

“There’s always a misnomer out there that it’s the amount of goals you score, but it’s the amount you prevent. And that’s where we have to be better. Scoring against these guys, that’s not a worry.”

Vasilevskiy is carrying an uncharacteristic .890 save percentage into Sunday. The strange part is the Leafs beating him since Game 1 are not named Auston Matthews, Mitch Marner and John Tavares, but David Kampf, Colin Blackwell (with a great assisted by defenceman Ilya Lyubushkin) and Alex Kerfoot.
Cooper is not telling his lanky Russian goalie to turn in his Vezina Trophy after five years as the NHL’s wins leader.

“It’s 3-1 last night and (Matthews), the best scorer in our league, goes down on a breakaway. Vas stops that, then the rebound, and gives us a chance to come back that we almost did. At 4-1, we’re probably out to lunch. That’s a big-time goalie.

“I believe we have the best in the world in our net. But the (great) looks we’ve given them … not a ton, but phenomenal open-net tap ins. Your goalie can only be asked to do so much. The guys have to play in front of him.”

You don’t win eight straight playoff series without some adversity and the same way they brushed off a 5-0 Toronto win in the opener, Tampa has ample resources to rally. But it’s clear the Leafs will be a tough out.
Toronto coach Sheldon Keefe is trying not to give the Lightning any ammunition between games. When a reporter asked him about getting 13 goals against Vasilevskiy, Keefe made sure to correct it to 11, adjusting for Ilya Mikheyev’s two empty -netters on Friday. The Leafs didn’t take Saturday off to enjoy the balmy weather, but instead worked out at the Lightning’s practice rink.

“We’re very business-like,” Keefe said. “We liked a lot of the things we did last night, but I looked at it and see tons of things we can do better, as a team and as individuals.

“We have to build, we’re still early in the series here. After two or three games, you have a pretty good feel for your opponent and they do of us, I’m sure. But I don’t think we’ve played our best hockey.”

Keefe is considering staying with a late game change he made Friday, flipping the versatile Alex Kerfoot to the first line with Matthews and Marner, in place of Michael Bunting. Keefe’s preferred third line of Mikheyev, Kampf and Pierre Engvall could then operate after Kerfoot started Game 3 with them.
Matthews and Marner, meanwhile have to try and shake Tampa’s top two-way line of Alex Killorn, Anthony Cirelli and Brayden Point.

“Against a team like that, if you don’t get out of your zone in the first 10 seconds, if not quicker, they will gain control, spread you out and it’ll be very hard to get out.” Keefe said. “From there, you are in a position of containing and not giving up the slot or a high-danger shot. We were in that mode a lot, especially in the second half and it took away a lot of our offence.”

Defenceman Morgan Rielly, the longest tenured Leaf who has suffered through all five first-round defeats was also staying grounded, in case anyone gets carried away that Game 5 on Tuesday at Scotiabank Arena could be an elimination game.

′′“It’s just (gaining) experience,” Rielly said. “By no means are we a group that has been through a lot (of playoffs). You look at Boston, St. Louis and these guys. But I think we’re getting there. We’ve tried to draw from experiences and grow and learn. We have a long way to go, but I like where we’re at.”