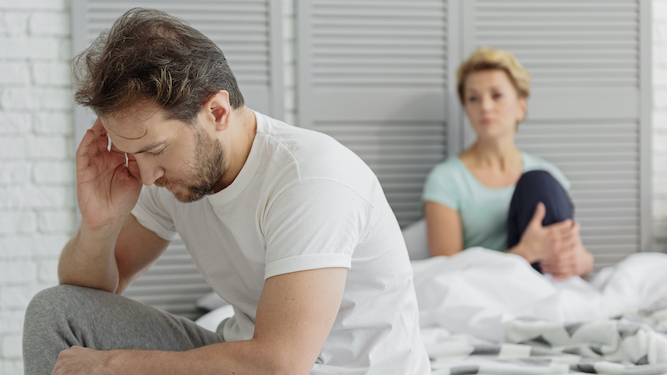 MARRIED couples who have unexpectedly had sex are more awkward the next morning than total strangers, they have confirmed.

Dr Helen Archer said: “When you don’t know someone’s name before going to town on their most intimate parts with your mouth, you’re able to shrug off the embarrassment. After all, you’re never going to see them again.

“But when you know everything from the name of their first hamster to their taste in wallpaper, it makes meeting their eye after having brought them to orgasm mortifying. How can you discuss parents’ evening with someone who came in you last night?

“The halting conversation and inward cringing can last for months. It’s no wonder married couples only have sex once a year. If that.”

Ryan Whittaker of Peterborough said: “My wife and I did it in March, and since then every conversation’s seemed like awkward, elephant-in-the-room avoiding small talk. The silences are agonising.

“By contrast I did the barmaid at my local in the alley where they stack the kegs last week, and our conversation’s flowed as if it never happened.”