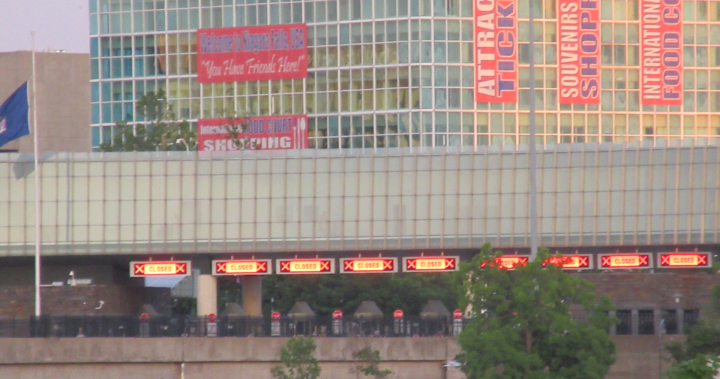 The mayor of Niagara Falls, Ont., says he keeps dreaming of an event with the prime minister and Ontario’s premier cutting a “massive ribbon” at the Canada-U.S. border signaling Canada is once again open for business.

Jim Diodati made that suggestion as a number of Canadian MPs and border-city mayors published another open letter to Ottawa demanding the elimination of all remaining COVID-19 restrictions still in effect along the northern border.

“Typically, 50 per cent of our revenue comes from the U.S., from our international visitation. It really matters to us that we do the right things.”

Diodati joined 22 municipal leaders, members of congress and MPs this week calling on the federal government to scrap COVID-19 testing requirements for fully-vaccinated people wanting to cross the border from the U.S. into Canada.

The joint message argues removing restrictions would aid recovery from COVID and that communities have means to slow transmission rates among the population which have essentially allowed both countries to return to “normal daily life.”

“We’re hopeful. We believe by the end of … September we’re going to be done with these unnecessary border restrictions for getting into the country.”

Staff reports estimate the city is still down around 50 per cent for international visitation compared to pre-pandemic numbers in 2018.

In the same period, Niagara Region estimated close to 40,000 people had tourism-related employment in the area.

The letter did not refer to Canada’s ArriveCAN pre-screening app as an issue, but the software is still needed for all travellers, with limited exceptions, entering Canada by air, land, rail or marine vessel.

The online protocols requires travellers to submit information within 72 hours of arriving in the country or before boarding any cruise ship destined for Canada.

The online campaign is calling on Ottawa to scrap ArriveCan.

In late August, parliamentary secretary to the minister of transport Annie Koutrakis insisted abandoning ArriveCan would increase delays and bottlenecks and removing a mask mandate would not reduce wait times.

About 80 per cent of Niagara Falls tourism revenue comes during the summer months.

City staff have yet to tally tourism numbers for 2022, according Diodati, but he says numbers are up from the previous two years largely due to conferences at the convention centre.

“So that business is back,” Diodati said.

“I can tell you right now, this week, we’ve got the Ontario Construction Association, 2,000 delegates in town all week.”