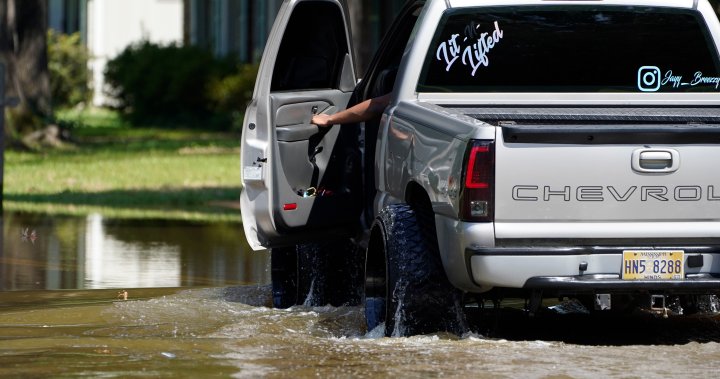 The forecasted flooding in Mississippi could not have come at a worse time for Veronique Daniels, who became homeless three months ago and was sleeping on her mother’s back porch in Jackson when she got wind of the impending disaster.

The Red Cross has opened a temporary shelter at the Jackson Police Department Training Academy. As of Sunday afternoon, Daniels was the first person to arrive. She found out about the shelter on Facebook and had her mother drop her off Sunday morning.

Woman dies in her vehicle as Dallas hit with flooding, heavy rains

Daniels’ mother lives in Canton Club Circle, the same Jackson subdivision that flooded two years ago. Residents on Sunday were taking precautions as the previous flooding loomed large in their memories.

In 2020, days of torrential downpours caused the Pearl River to reach 36.7 feet (11.2 meters) and Jackson homes in the hardest hit neighborhoods were filled with dirty, snake-infested flood water.

Now, experts predict the river will crest at 35.5 feet (10.8 meters) on Monday. The city estimates that 100 to 150 homes could be impacted by Monday night.

“If you are capable of getting out now, get out now. Get out as soon as possible,” said Mayor Chokwe Antar Lumumba at a news conference Saturday, the same day Mississippi’s governor declared a state of emergency.

“Our advice is to have a plan and be ready to leave at a moment’s notice,” Gagliardi said. “And I think that’s what people are waiting for, that moment’s notice.”

As Red Cross volunteers helped Daniels finish a load of laundry, she waited for her 18-year-old daughter and an 11-month-old grandson to arrive. They had stayed with friends the previous night, but the family’s long-term plans are up on in the air.

Some Jackson residents were moving belongings out of their homes. Others were stocking up on sandbags. The Mississippi Emergency Management Agency had deployed 126,000 sandbags to act as water barriers in preparation for flooding.

“A lot of people took the heat last time,” Day told The Associated Press on Sunday, referring to residents who chose not to take precautions two years ago.

The Mississippi floodwaters arrive in the wake of the destruction and death visited upon Kentucky residents last month. Those floods caused at least 39 deaths and robbed thousands of families of all of their possessions. Nearly a month later, residents are wrestling with the question of whether to rebuild at the place they call home or start over somewhere else.

In Jackson, officials have not implemented a mandatory evacuation order but have said residents risk fending for themselves if they choose to stay home.

A Ridgeland police officer patrolling the grounds of the Harbor Pines Mobile Home Community on Sunday estimated that about 20% of the residents had yet to evacuate by Sunday afternoon.

He warned: “If you stay here and you get stranded, we may or may not be able to come rescue you.”