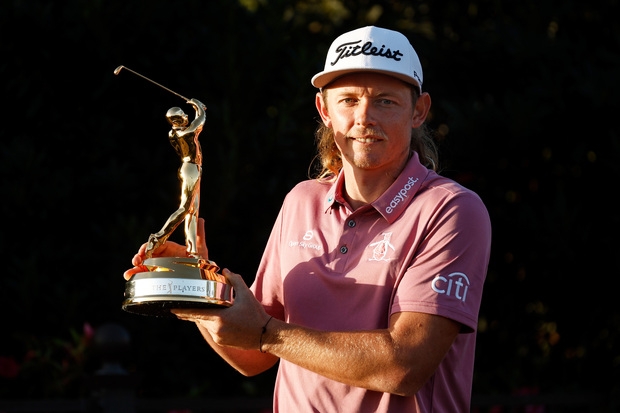 PONTE VEDRA BEACH. Fla. — The Players Championship began on the Golf Channel, morphed into the Weather Channel, and finished Monday looking like a cross between The Amazing Race and Survivor.

In the end, it was 28-year-old Australian Cameron Smith taking home the record $3.6-million winner’s cheque, shooting a six-under 66 in the final round to win by one stroke over underdog 54-hole leader Anirban Lahiri.

“I grew up watching rugby league and watching the Queenslanders come from behind, and even when it got gritty they’d somehow manage to win,” Smith said. “I think that’s kind of instilled in all of us (Aussies).”

Smith now lives in Ponte Vedra Beach, near TPC Sawgrass, and this week had his mother Sharon and sister Melanie visiting for the first time since before the pandemic.

“I haven’t seen them in two years,” Smith said through tears right after winning. “It’s really cool to have them here. My main priority really was just to hang out with them and golf was second for these few weeks.”

If we learned one thing this week, it’s that when it rains it pours.

That was proved plenty over five long days at this water-logged and weather-delayed Players Championship. On Monday, Smith proved it again by rolling in nearly every putt he looked at, making 10 birdies during a round powered by an incredible 13 one-putts.

The Aussie looked as though he might throw it all away on the difficult 72nd hole, when, with a two-stroke lead, he hit his second shot in the water while trying to advance his ball down the fairway after driving it into the trees on the right. His short game magic appeared one last time, though, and he got up and down to limit the damage to a bogey five, which narrowed his lead to one stroke, but it proved enough.

“I was obviously very frustrated at myself,” he said. “For somewhat of an easy chip shot, probably the easiest shot I had all day, to hit it in the water was quite frustrating. But yeah, just kind of regrouped. I knew I had to get up-and-down to really close it out.”

With torrential rain washing out much of play on Thursday and Friday, the tournament was destined for a Monday finish. A tornado warning on Saturday morning brought some of the wildest conditions in Players history, and a little controversy as only half of the field was forced to play in it. The harshest criticism came from Kisner, who wasn’t happy that his side of the draw received the worst of it.

“It’s pure luck and somewhat loss of integrity of the tournament in my opinion,” Kisner said on Saturday evening.

The tournament turned in to a sprint to the finish that began in temperatures around the freezing mark on Sunday morning, and with some players having played just a single round. When the tournament finally reached its 36-hole halfway point, Canadians Corey Conners and Taylor Pendrith were tied in fifth place, and right in the hunt. But it was a wild Monday for the Canadians in the field as well, as Adam Hadwin (66) leapfrogged both Conners and Pendrith to finish tied for ninth and take home $525,000.

“Just kind of a wild week,” Hadwin said. “Something I don’t know if I’ve ever been a part of so far.”

The Abbotsford, B.C. native began his final round on the 10th hole and soared up the leaderboard on his second nine, making four birdies in six holes to get within one stroke of the lead late in the afternoon. Hadwin’s perfect record on the island green is intact, he’s now played it 24 times without finding the water. He said he was rolling along Monday until he glimpsed at the leaderboard.

“I actually felt really good until I saw that I was one back with two to play, and unfortunately I started thinking about it too much,” he said. “My rhythm was off those last couple holes. It is was it is, I’ll learn from it. It was exciting to get back into it again.”

The 34-year-old two-time Presidents Cup player and PGA Tour winner has been working in some swing changes and is happy to see such positive results after a tough year on the golf course.

“I’m really looking forward to the rest of the year now.”

Fellow Canadian Pendrith (69) also finished inside the top-15, finishing tied for 13th. The big-hitting PGA Tour rookie continues to prove he has the game to compete on the toughest courses in the world.

“Obviously, it’s the best field in golf and I was right there for most of the week,” Pendrith said. “A lot of positives and it gives me a little bit more confidence that I can play with the best. I’m very pleased with my first start here, obviously it could have been a lot better but I’m happy.”

Conners, Canada’s top-ranked golfer (70), finished tied for 26th at four-under for the week, and accomplished it while battling an unusually erratic driver.

“Mentally and physically draining for sure,” Conners said. “I still feel pretty good about my game, I didn’t have my best stuff. A little disappointed with that but things aren’t far off.”

Dustin Johnson holed out from the fairway on his final hole on Monday to tie the course-record with a nine-under 63, moving up 50 spots to finish T9 in a group with Hadwin. World No. 1 Jon Rahm (77) went the other direction, making a quintuple-bogey nine on the par-4 fifth hole, dropping 29 spots to finish T55 at two-over.

Smith is the fifth Australian to win the Players Championship and will move to sixth in the world rankings.