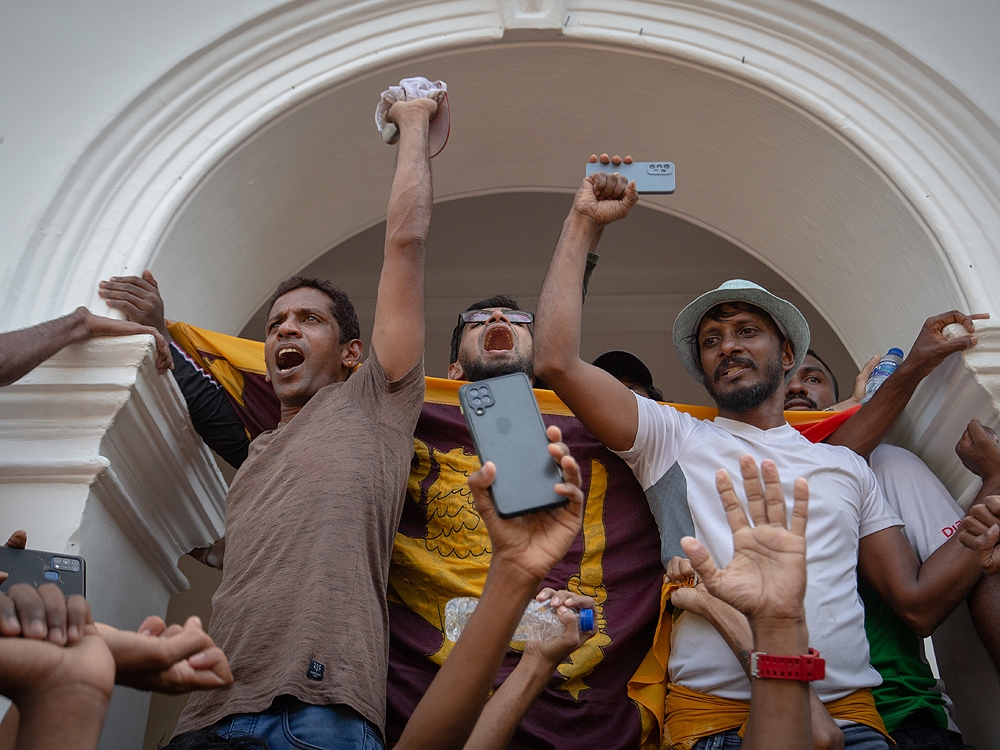 COLOMBO, Sri Lanka — Sri Lanka’s president fled the country early Wednesday, slipping away only hours before he promised to resign under pressure from protesters angry over a devastating economic crisis. But crowds quickly trained their ire on the prime minster, storming his office and demanding he also go.

President Gotabaya Rajapaksa and his wife left aboard a Sri Lankan Air Force plane bound for the Maldives, the air force said in a statement. That brought little relief to the island nation gripped for months by an economic disaster that has triggered severe shortages of food and fuel — and now is beset by political chaos.

Thousands of protesters demanding that Prime Minister Ranil Wickremesinghe step down rallied outside his office compound and some scaled the walls, as the crowd roared its support and tossed water bottles to those charging in. Some could later be seen inside the building and standing on a rooftop terrace waving Sri Lanka’s flag.

In a move only likely to further enrage protesters, Rajapaksa appointed his prime minister as acting president since he is out of the country, according to the Parliament speaker. Rajapaksa has yet to resign, but Speaker Mahinda Yapa Abeywardena said the president assured him he would later in the day.

“We need both … to go home,” said Supun Eranga, a 28-year-old civil servant in the crowd outside Wickremesinghe’s office. “Ranil couldn’t deliver what he promised during his two months, so he should quit. All Ranil did was try to protect the Rajapaksas.”

But Wickremesinghe has said he would only leave once a new government was in place. Police initially used tear gas to try to disperse the protesters outside his office but failed, and more and more marched down the lane toward the compound. As helicopters flew overhead, some demonstrators held up their middle fingers.

Some protesters who appeared to be unconscious were taken to a hospital.

Amid the chaos, Wickremesinghe declared a nationwide state of emergency, and state television briefly stopped broadcasting.

Protesters have already seized the president’s home and office and the official residence of the prime minister following months of demonstrations that have all but dismantled the Rajapaksa family’s political dynasty, which ruled Sri Lanka for most of the past two decades.

On Wednesday morning, Sri Lankans continued to stream into the presidential palace. A growing line of people waited to enter the residence, many of whom had traveled from outside the capital of Colombo on public transport.

Protesters have vowed to occupy the official buildings until the top leaders are gone. For days, people have flocked to the presidential palace almost as if it were a tourist attraction — swimming in the pool, marveling at the paintings and lounging on the beds piled high with pillows. At one point, they also burned Wickremesinghe’s private home.

At dawn, the protesters took a break from chanting as the Sri Lankan national anthem blared from speakers. A few waved the flag.

Malik D’ Silva, a 25-year-old demonstrator occupying the president’s office, said Rajapaksa “ruined this country and stole our money.” He said he voted for Rajapaksa in 2019 believing his military background would keep the country safe after Islamic State-inspired bomb attacks earlier that year killed more than 260 people.

Nearby, 28-year-old Sithara Sedaraliyanage and her 49-year-old mother wore black banners around their foreheads that read “Gota Go Home,” the rallying cry of the demonstrations.

“We expected him to be behind bars — not escape to a tropical island! What kind of justice is that?” Sedaraliyanage said. “This is the first time people in Sri Lanka have risen like this against a president. We want some accountability.”

Protesters accuse the president and his relatives of siphoning money from government coffers for years and Rajapaksa’s administration of hastening the country’s collapse by mismanaging the economy.

The family has denied the corruption allegations, but Rajapaksa acknowledged some of his policies contributed to the meltdown, which has left the island nation laden with debt and unable to pay for imports of basic necessities.

The shortages have sown despair among Sri Lanka’s 22 million people and were all the more shocking because before the recent crisis, the economy had been expanding and a comfortable middle class growing.

The political impasse has only added fuel to the economic disaster since the absence of an alternative unity government threatened to delay a hoped-for bailout from the International Monetary Fund. In the meantime, the country is relying on aid from neighboring India and from China.

As the protests escalated Wednesday outside the prime minister’s compound, his office imposed a state of emergency that gives broader powers to the military and police and declared an immediate curfew in the western province that includes Colombo.

The air force said in a statement that it provided an aircraft, with the defense ministry approval, for the president and his wife to travel to the Maldives, an archipelago in the Indian Ocean known for exclusive tourist resorts. It said all immigration and customs laws were followed.

The whereabouts of other family members who had served in the government, including several who resigned their posts in recent months, were uncertain.

Sri Lankan presidents are protected from arrest while in power, and it is likely Rajapaksa planned his escape while he still had constitutional immunity. A corruption lawsuit against him in his former role as a defense official was withdrawn when he was elected president in 2019.

Assuming Rajapaksa resigns as planned, Sri Lankan lawmakers agreed to elect a new president on July 20 but have struggled to decide on the makeup of a new government to lift the bankrupt country out of economic and political collapse.

The new president will serve the remainder of Rajapaksa’s term, which ends in 2024, and could potentially appoint a new prime minister, who would then have to be approved by Parliament.

“Gotabaya resigning is one problem solved — but there are so many more,” said Bhasura Wickremesinghe, a 24-year-old student of maritime electrical engineering, who is not related to the prime minister.

He complained that Sri Lankan politics have been dominated for years by “old politicians” who all need to go. “Politics needs to be treated like a job — you need to have qualifications that get you hired, not because of what your last name is,” he said, referring to the Rajapaksa family.