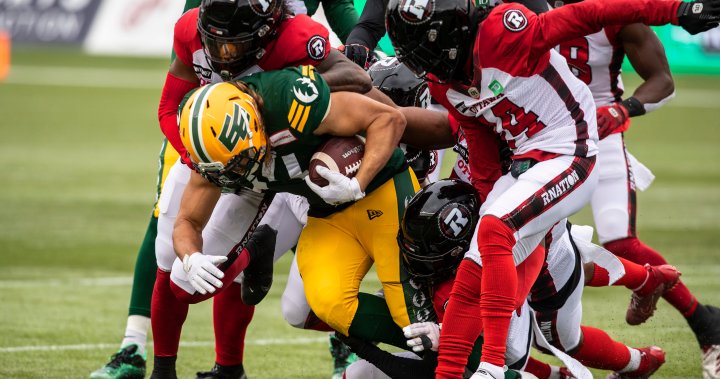 Backup quarterback Caleb Evans scored a pair of short-yardage touchdowns as the Redblacks put together their strongest showing of the season in a 25-18 victory over the Elks on Saturday.

It was only the second win of the CFL season for the Redblacks (2-8), who snapped a two-game skid.

“I thought our defence did a good job getting take-aways and tackling them in space and making their offence uncomfortable. Our special teams did good and popped off a couple of runs. Offensively, Nick Arbuckle did a good job,” said Ottawa head coach Paul LaPolice.

“We had a couple of fumbles that we need to clean up and get better at, but it was a good complete team win.”

It was Arbuckle’s first start as quarterback for Ottawa since being traded there in July by Edmonton and he was 21-for-32 passing for 219 yards.

“It was a lot of fun,” he said of the win. “Just playing with these guys was special and to experience this win as a team was good. It was an added bonus to play here and do it on this field against so many of my brothers (on the Elks) who I went through training camp and the tough days with.”

Arbuckle was 0-3 in his last three CFL starts this season for the Elks.

“They controlled the football, I’ve got to do a better job of getting these guys ready to play,” said Elks head coach Chris Jones. “We still have not put together four quarters yet. We came back out in the second half and played better football, but played just good enough to end up losing the football game.

“And that’s not acceptable.”

The record for consecutive losses at home is 14.

“I don’t know, it’s crazy,” Elks corner back Nafees Lyon said. “You should be winning your home games but just, right now, it’s not working out that way.”

Edmonton started the scoring midway through the opening quarter as a 53-yard passing play from quarterback Taylor Cornelius to Kenny Lawler set up a 33-yard Sergio Castillo field goal.

Ottawa made good with a first quarter drive on the heels of Edmonton coughing up the ball on a third down gamble, with quarterback Nick Arbuckle scoring on a one-yard sneak. The convert attempt missed.

The Redblacks kept up the pressure midway through the second as a 10-play drive was capped off by a two-yard TD by Evans.

Ottawa took a 20-3 lead into the half as Evans took in his second major of the game soon after his team recovered its own fumble on the Elks’ one-yard line. Edmonton had a last-second chance to kick a field goal, but it was blocked by Davon Coleman.

Edmonton came back from the break with a second wind and got a four-yard TD run from Cornelius, coming on the heels of a 42-yard passing play to Lawler.

The Elks conceded a safety and Ottawa made a comeback more difficult with a 28-yard Lewis Ward field goal early in the fourth.

With five minutes remaining in the final frame, Cornelius punched in both a one-yard QB sneak, and also a two-point convert. However, that is close as they would get in their comeback bid.

The Redblacks are in Montreal to face the Alouettes next Friday, while the Elks are off until Monday, Sept. 5, when they are in Calgary to face the Stampeders in the Labour Day Classic.