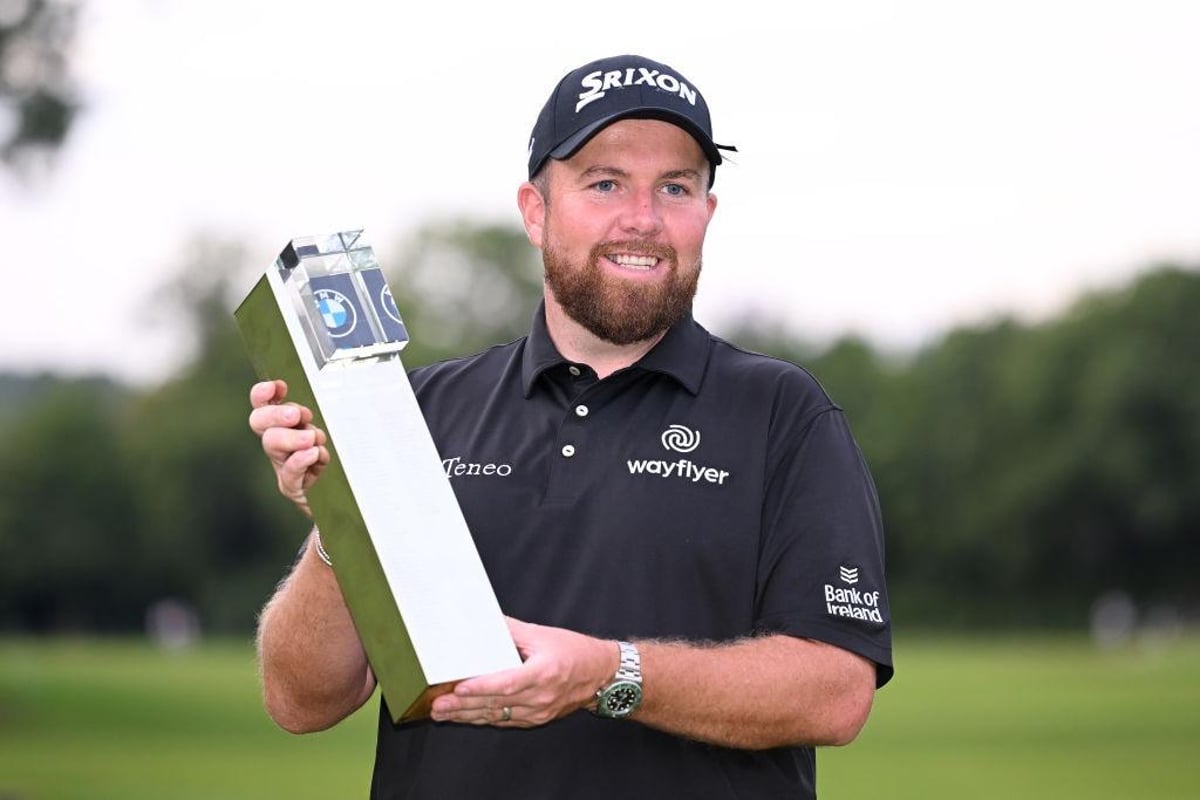 In 12 previous appearances at the iconic Surrey venue, Lowry had twice led at halfway and recorded nine top-20 finishes and four top-10 efforts, including runner-up in 2014 to McIlroy.

The roles were reversed on this occasion and Lowry landed the title triumph he so deserved in style by negotiating 54 holes – the event was curtailed due to Friday’s play being scrapped following the death of Her Majesty Queen Elizabeth II – without a single bogey on his cards.

A closing 65 for a 17-under-par 199 total gave the 2019 Open champion a one-shot success over both Rahm, who signed off with a scintillating 62, and McIlroy after his eagle putt at the last to force a play-off agonisingly stayed above ground.

Shane Lowry celebrates after putting on the 18th hole to take the lead in the BMW PGA Championship at Wentworth. Picture: Warren Little/Getty Images.

The 35-year-old also admitted that it had been enjoyable to come out on top in a field that included 18 LIV Golf players, with American Talor Gooch finishing the best of the rebels in fourth place, two shots behind the winner.

McIlroy, who closed with a 67, was magnanimous in defeat. “Look, I’m okay,” he insisted, having cemented his position at the top of the DP World Tour Rankings as he bids to complete the double after already winning the PGA Tour’s FedEx Cup this year.

“I think Shane winning softens the blow. If it had been someone else, I might not have felt as comfortable with it as I am. Seeing a friend win is always great and I am really happy for him.

“I struggled today. I didn’t hit my irons very well. I was sort of scrambling a lot. But I got the most of my round. I wish I had made 4 on 17, but, apart from that, I dug in there and did what I needed to do to give myself a chance going down 18 and that’s all you can ask for.”

It didn’t seem as though Rahm, having already started the day six off the lead, was going to be in the equation after he covered his opening eight holes in one under, but the Spaniard then hit one of the hot streaks that have been a feature of his short career.

The 2021 US Open champion covered the next five holes in six-under, a burst that included an eagle at the 13th, where he holed from 12 feet. A bogey at the 15th was untimely, but it proved to be his sole slip of the day.

John Rahm celebrates after finishing with an eagle in the third round of the BMW PGA Championship at Wentworth. Picture: Octavio Passos/Getty Images.

In went a 24-footer for a birdie at the 16th before getting up and down from the deep dip at the right side of the 17th green for another gain. His 21-footer for an eagle at the last meant he’d stormed home in 29.

“The reaction you saw on the last hole was for finishing off a great round of golf,” he said of celebrating with a huge first pump. “That was about as good as I can play that hole. I was just thinking of going as low as I could an everything clicked today.”

Rahm was done and dusted by 3.45pm, meaning he faced a lengthy wait to see if he’d either be caught or overtaken. It was just after 6pm that he was eventually toppled by Lowry as he birdied the last in rounding off another polished performance here.

That left McIlroy needing an eagle at the last to force a play-off after he’d been unable to birdie the previous hole but, while giving himself a great chance and being willed on by the fans in the huge grandstand at the back of the green, it wasn’t to be for the 2014 winner on this occasion as a 20-footer agonisingly stayed above ground.

LIV Golf duo Patrick Reed shakes hands with Lee Westwood of England on the 18th hole after the final rond of the Ross Kinnaird/Getty Images.

Playing in the same group, LIV Golf pair Patrick Reed and Lee Westwood signed off with a flourish as they signed for 63 and 65 – the better-ball added up to a 58 – respectively to make significant jumps up the leaderboard. “There’s still some of that European and American Ryder Cup in us,” joked Reed.

Speaking as a huge roar greeted McIlroy teeing off at the first in the third last group, he went on to explain why he wants to keep playing on the DP World Tour, as will be the case again in the Cazoo Open de France at Le Golf National in a fortnight’s time.

“I’ve consistently played on this tour since 2015, so I’ve shown my support,” said Reed, who was made an Honorary Life Member of what was formerly known as the European Tour in 2018 – the year he won The Masters.

Commenting on the reception he’d received on and off the course on this occasion, he added: “Guys have been supportive and acting the same way to me as whenever I was playing on the PGA Tour. I think I feel like we have a mutual respect, the guys on The European Tour and myself. The fans were great and very supportive. It’s nice because I plan to continue coming to England.”

Unlike either Westwood or Ian Poulter, Reed didn’t wear his normal LIV Golf gear in the tournament rounds. “I got my clothing literally an hour and 40 minutes before I teed off on Thursday,” he revealed.“At the end of the day, I hope all these tours just kind of work something out and get together because there’s no point in all this going back and forth and people smearing other people because it does nothing for us, does nothing for the brand and does nothing for golf.”

Westwood, who is unlikely to play again on the DP World Tour this season, also spoke warmly about the reception he’d received over the week. “Incredible,” he declared. “You know, the fans are always really good here but this week, it’s been really special.

“Obviously with Her Majesty passing away, everybody is a little sombre and downbeat but the fans looked like they really enjoyed their golf today, as we did and tried to give them something to enjoy. It’s an entertainment game, isn’t it?”