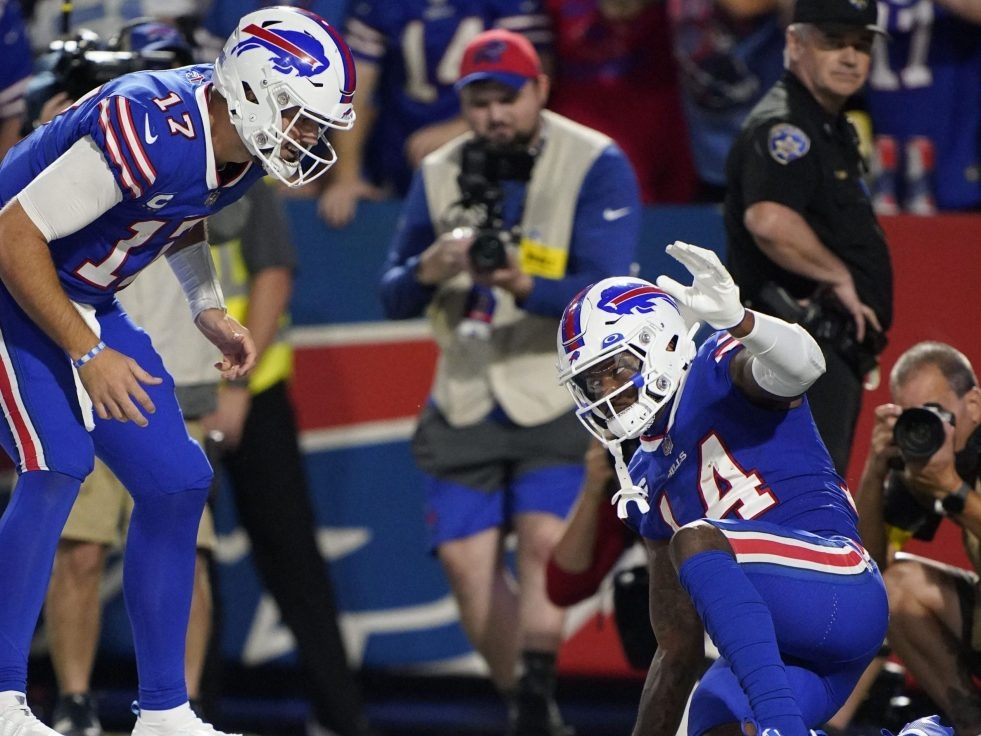 ORCHARD PARK, N.Y. — Josh Allen threw four touchdown passes, including three to Stefon Diggs, and the Buffalo Bills rolled past Derrick Henry and the Tennessee Titans 41-7 in their home opener on Monday night.

The Bills followed a season-opening 31-10 rout of the Super Bowl champion Los Angeles Rams by throttling an opponent that has been their nemesis in each of the past two seasons. Fullback Reggie Gilliam and linebacker Matt Milano, with a 43-yard interception return, also scored touchdowns for Buffalo.

Allen topped 300 yards passing for the 15th time of his career, completing 26 of 38 attempts for 317 yards, and sat out the entire fourth quarter. Diggs had 12 catches for 148 yards. He has exceeded 100 yards in each of his first two games, a feat accomplished previously for the Bills only by Hall of Famer Andre Reed.

The Bills have topped 30 points twice after doing so nine times last year. And their defence limited Tennessee to 182 yards of offence and 12 first downs, while registering two sacks and forcing four turnovers.

The two-time defending AFC South champions face numerous questions about a defence that gave up 313 yards passing a week after allowing 238 yards rushing. Meantime, Henry and their offence continue to sputter.

The two-time rushing champion was limited to 25 yards on 13 carries while scoring on a 2-yard plunge.

Injuries affected both teams, the most serious involving Bills cornerback Dane Jackson, who hurt his neck in a troubling collision with a teammate and was taken to a hospital for evaluation. The Bills said Jackson had full movement in his limbs.

Otherwise, the two-time defending AFC East champion Bills continued making a splash in their second consecutive prime-time appearance, while at the same time easing frustrations of the past, including a 42-16 loss to Tennessee in 2020.

Still stung by memories of Allen being stuffed for no gain on fourth down near the goal line in the final seconds of the last season’s loss 34-31 loss in which Buffalo squandered a seven-point fourth-quarter lead, the Bills scored on their opening drive and never looked back.

Up 10-7, Allen and Diggs took over by connecting for two touchdowns spanning halftime. Faking left, Allen found Diggs in an opening for a 4-yard touchdown with a minute remaining in the second quarter.

Allen and Diggs then blew the game open by connecting on a 46-yard touchdown on Buffalo’s first possession of the second half. Given time in the pocket, Allen threw a perfectly placed pass to Diggs, who reached out to catch the ball before tumbling head-first into the end zone.

The wheels fell off for the Titans, who were outscored 24-0 in the third quarter. Tennessee rookie Kyle Philips muffed a punt for a second consecutive week, and Ryan Tannehill threw interceptions on consecutive possessions.

Tannehill finished 11 of 20 for 117 yards and was benched following Milano’s interception with 3:49 left in the third quarter. Rookie Malik Willis took over, and if Tannehill continues to struggle, Tennessee fans will want to see more of the young backup.

Bills Hall of Fame defensive end Bruce Smith asked fans for a moment of silence before the game to honour the memory of 10 people killed in shooting spree at a Buffalo supermarket in May.

“We stand united with the victims and the victims’ families,” Smith said.

“No one can erase their pain and suffering. But Buffalo, your acts of love and kindness will never be forgotten,” he added. “The national media, the national activists have all gone. But we are here right now. It is up to us to love these families. To be with them.”

Bills: S Micah Hyde sustained a neck injury. … Milano did not return because of what was termed a stinger. … DT Jordan Phillips hurt his hamstring. … No. 2 WR Gabe Davis was inactive after hurting his ankle in practice on Saturday. … DTs Brandin Bryant and C.J. Brewer were elevated from the practice squad to fill in for injured starter Ed Oliver (ankle) and backup Tim Settle (calf).

Bills: At the Miami Dolphins on Sunday.