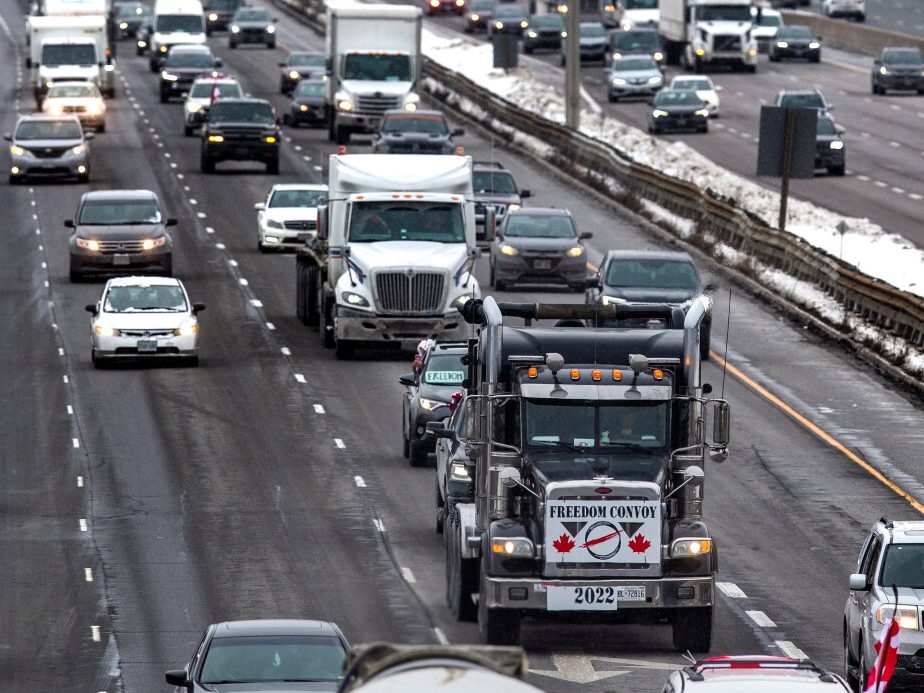 It was an extremely cold day to be out on Hwy. 401 cheering on a convoy of truckers heading to Ottawa in the name of freedom, hoping to end COVID-19 vaccine mandates.

But thanks to Prime Minister Justin Trudeau lighting the match, these protest supporters were on fire and not noticing the mercury.

When Trudeau grossly labelled hard-working truckers, supporters and protesters as a “small fringe” group with “unacceptable views” on Wednesday, many went into the cold to push back against the unfair narrative.

It was a clarion call for all of those people who have been on the losing end of Canada’s never-ending government pandemic overreach.

“We have to be out here,” supporter Fran Boudrie said. “This is history.”

She and her pal Mary Fenwick held Canadian flags and a “freedom” sign while enduring the frigid weather on the Mississauga Rd. overpass.

“We want to show our appreciation,” Fenwick said.

They were not alone.

Thousands of people took to the highway Thursday from Niagara to Hamilton to Milton to Port Hope and throughout the GTA to offer their backing for a convoy of truckers who hope to send a message loud and clear that not only are they vital to Canada’s supply chain, they are entitled to choose for themselves what medicine they put in their bodies.

Those driving the trucks toward Ottawa said they were emotional at the sight of the crowds.

“It’s like nothing I have ever seen before,” said Niagara-area truck owner and operator Harold Jonker, adding no matter who tries, “they are not stopping us.”

The support for the truckers is not just local.

Billionaire Elon Musk, the richest person in the world, got into the action by tweeting “Canadian truckers rule” on Wednesday.

Lampooning Trudeau’s last-minute declaration that he was exposed to COVID-19 and will isolate for five days, American comedian Rob Schneider took to twitter and teased: “Generalissimo Trudump has (conveniently) contracted the truckers-are-coming-for-me variant! Official statement should read ‘Staying Safe avoiding any vehicles with more than 17 wheels!’”

Meanwhile, all eyes are on Ottawa as people try to determine just how many trucks and supporters will make their way up Hwy. 416 to the nation’s capital.

It’s not an easy question to answer thanks to many variables. For one thing, there are different convoys coming from different directions. For example, convoys that were cheered Thursday in Vaughan and along Hwy. 401 were not the main convoy. That lengthy collection of trucks and vehicles, which many believe could eventually be declared a world record, is still up in northern Ontario and it’s unclear if it will get to Ottawa in time.

As of late Thursday, this convoy that began in British Columbia was in Wawa, northwest of Sault Ste. Marie. With rules surrounding driving hours, winter road conditions and closed sections of the highway, concerns of fuel supply and weigh scale stops, they still have some serious kilometres to navigate.

Most are expecting a large crowd in Ottawa that Trudeau won’t soon forget. If the weekend of protesting remains peaceful and is huge in nature, it could be a blow for the prime minister. If the main convoy can’t get there and the event is not as large as organizers had hoped, Trudeau can escape this with a smug chuckle.

At this point, however, no one is sure which way this will go.

What is clear is while the forecast has Ottawa dropping down to a frosty low of -20 C on the weekend, thanks to Trudeau’s smears, truckers may not notice since they are already steaming hot.