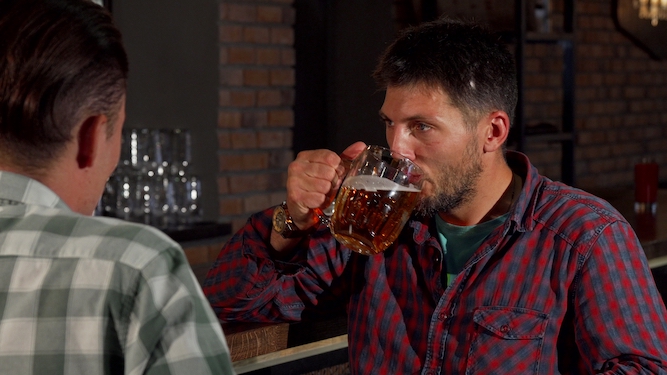 DO you have an unbreakable bond of friendship with a mate from school you can’t stand? This is how he’ll plague you until your dying day:

It’s a laugh to reminisce about oddball teachers with both sweat and anger management problems. Spending all night being told about Iain Bryce’s parents moving to Liverpool in 1985 or Sally Pearce taking the highly unusual step of having two kids, less so.

He still knows other twats from school

You never know the other person from school, who you barely remember and your mate was never particularly pally with, is going to be there until you arrive at the pub. And it’s a universal law that this person has become a frighteningly boring arsehole who bangs on for 90 minutes about their kids being good at hockey.

He reminds you of doomed teenage romances

Teenage crushes are embarrassing, unrequited love, unlistened-to mixtapes and unbearable poetry. You don’t need a friend reminding you that ‘you used to follow Rachel Smith round like a lovesick puppy. They’d call it stalking now. She saw you in Tesco last year and hid behind a postbox.’

He has strangely reactionary views

In the decades since school you did drugs and learned about the world. Your mate, by contrast, developed workplace-friendly conservative opinions. Labour? They’ll bankrupt the country. Transsexuals? Shouldn’t teach it to kiddies. All you can fathom is it’s an evolutionary thing to fit in with an office of lower-middle-class neo-Nazis.

He’s still got a creepy interest in fit teachers

He sadistically brings up your past ambitions

Did you have a improbable ambition like going to film school or writing novels? Your mate revels in the hilarity of this as if you’d had an entirely serious plan to become Batman. Yes, it’s great nobody escapes the pit of job disappointment and boredom. Thanks for keeping me grounded, Dave.

He expects you to be always on call

You must always be available to entertain him if he’s at a loose end. Don’t fight it. Grit your teeth and spend an evening talking about when Dale Anderson fainted during cross-country running. Did you hear he’s moved three towns over now? Never would have expected that.