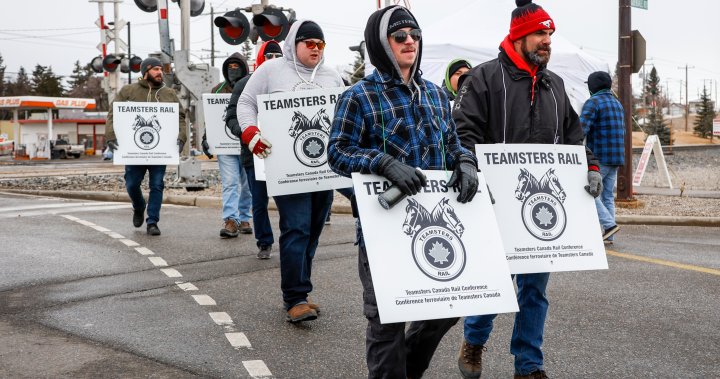 Canadians expect a swift end to a work stoppage at CP Rail, federal Labour Minister Seamus O’Regan said Sunday, hours after thousands of workers ended up on the picket line and trains came to a halt nationwide.

There is already pressure on O’Regan to end the labour dispute, but his spokeswoman said Sunday morning the government believes the best deal is reached at the bargaining table.

“There are always challenges in bargaining, but you push through them to get the agreement you need,” O’Regan said on Twitter. “CP and Teamsters Rail continue their work today. Canadians are counting on a quick resolution.”

More than 3,000 CP Rail conductors, engineers, train and yard workers represented by Teamsters Canada Rail Conference are off the job after the two sides failed to reach a deal before a midnight deadline set by the union and the company for either a strike or a lockout.

Dozens of industry groups asked the government to intervene last week and get a binding arbitration process in place before any strike or lockout.

“This work stoppage will have a deep and adverse impact for all Canadian businesses – both big and small – who rely on rail for their supply chain,” Beatty said. “This severe damage to Canadian supply chains at a time of heightened global uncertainty will extend beyond our borders and harm our reputation as a reliable partner in international trade.”

The House of Commons resumes Monday following a two-week break so legislation could come Monday if the government wanted.

1:32
Reactions pour in from the Prairies as possible CP Rail lockout draws closer

“A disruption to essential rail service during the crucial spring seeding season will have devastating effects on farmers, the economy, and domestic and international food security,” the group said.

The company and union both blamed the other for causing the work stoppage, though both also said they were still talking with federal mediators Sunday. Contract talks began last September.

On Wednesday, CP set a 72-hour deadline for a deal to be reached before it locked employees out. CP Rail spokesman Patrick Waldron said the company was at the negotiating table with federal mediators Saturday in Calgary, and at 10:45 EDT sent a new contract offer to the union.

“We never got a response,” he said.

He said the union began withdrawing employees before the midnight deadline, and said this is a strike, not a lockout.

“To be clear TCRC took strike action unilaterally,” Waldron said in an interview. “CP did not lock out its employees.”

Waldron said the company wanted to keep talking then, still wants to keep talking now and wants an immediate end to this. He said CP supports the government taking action, and called the union behaviour “dishonest and irresponsible.”

At three minutes to midnight Saturday, Teamsters issued a news release accusing the company of starting a lockout early, and accused CP of putting the “Canadian supply chain and tens of thousands of jobs at risk.”

“As Canadians grapple with a never-ending pandemic, exploding commodity prices and the war in Ukraine, the rail carrier is adding an unnecessary layer of insecurity, especially for those who depend on the rail network,” the statement said.

A few hours later a second statement was issued saying it was a lockout but also a strike.

Waldron said as a result of the work stoppage, CP is safely executing a Canada-wide shutdown of its services.

The CP Rail dispute will impact supply chains that are already being hammered by ongoing effects of the COVID-19 pandemic, were hit by trucker convoy protests blocking border crossings in February, and now are dealing with the effects, particularly on global fuel supplies, of the Russian invasion in Ukraine.

All the disruptions pushed inflation to a three-decade high, with essentials such as food and fuel facing some of the sharpest price hikes.

CP and the union have been negotiating since September, with wages and pensions a sticking point. For the union, a clause on where employees take their federally mandated break periods is also an issue.

CP Rail says this is the fifth work stoppage since 1993 and the eighth time in nine trips to the bargaining table that contract talks resulted in a need for federal conciliation.