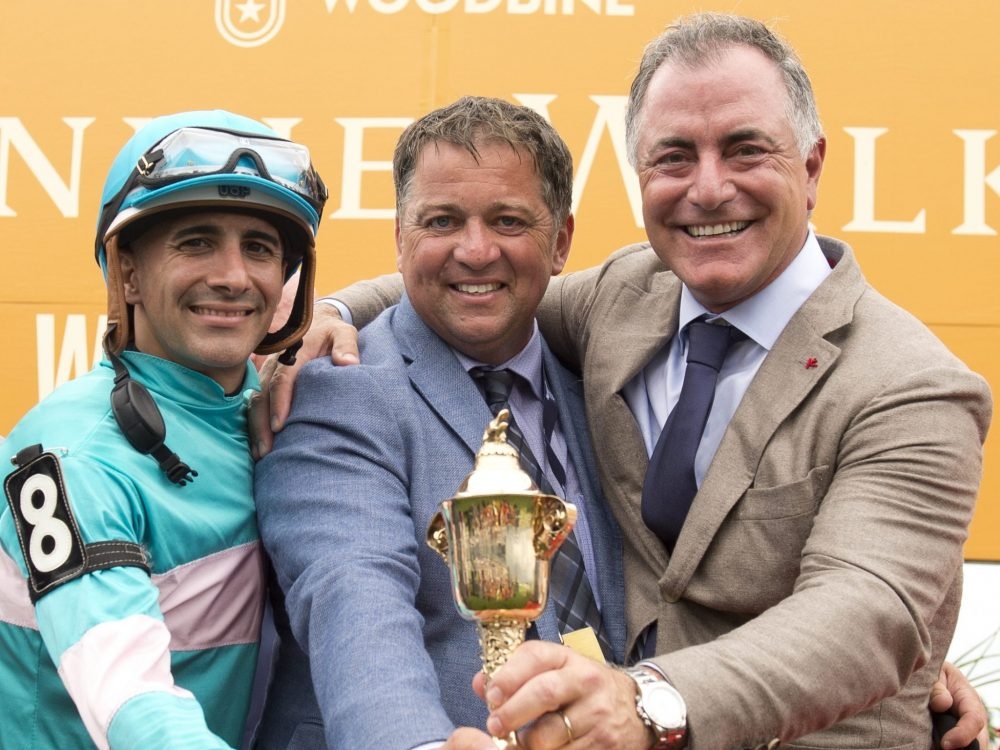 It has been just more than a week since the 163rd running of the $1-million Queen’s Plate was held at Woodbine Racetrack, and trainer Kevin Attard still looks somewhat shell-shocked.

And not just because his prized filly Moira won the Plate in sensational fashion, capturing Canada’s most prestigious horse race on Aug. 21 by a resounding seven lengths in record time — the first Queen’s Plate win for Attard, long one of the leading conditioners at the Etobicoke track.

In the days leading up to the big race — a week that is always crazy-busy for Queen’s Plate trainers — Attard had to deal with incredible heartache and adversity.

On the day of the Queen’s Plate Draw — right in front of the assembled crowd gathered at the Stella Artois Terrace at Woodbine for the Draw — one of Attard’s two-year-old horses went down on the track with a broken leg and had to be euthanized. And then on the day before the Plate, another two-year-old trained by Attard died of a heart attack. Needless to say, by the time Plate Day rolled around, Attard was an emotional wreck.

“You go years without having a catastrophic fatality and all of a sudden you have two in week, in the same week of the biggest race of your career,” Attard said on Sunday, before taking a second to compose himself.

The Queen’s Plate Draw is usually a day of fun and anticipation as the connections pick what post position their horse will be leaving from in the big race. But for Attard, it was surrealistic. As he sat in the new Stella Artois Terrace getting ready to select his post position and then talk to the media, his horse lay on the track. Eventually, Woodbine officials placed a tarp around the fallen two-year-old.

“It wasn’t easy being there, I can tell you,” said Attard. “You have to call the owner at that point to explain what happened. And then literally 20 minutes later you’re picking your post position, you’re holding back tears and trying to put on a brave face. But deep down, it’s hurting.

“It was very hard on me and a lot of people who work for me. You work with these horses every day,” the personable trainer continued. “It would be no different than somebody that owns a dog or a cat that has strong bond with their pet. And when something catastrophic happens to them and you lose one, it’s very emotional. From my point of view, I had the biggest race of my career coming up with a horse that has a great chance (Moira), and then you’re hit with this leading up to it.

“Obviously (Moira) winning was a big relief, not only because we won this historic event, but just the fact that it was a rough week,” Attard continued. “We did have a few winners going into the card, but when you lose a horse, it takes its toll on you.”

The Brampton native is a trainer who truly loves his horses. When his multi-graded stakes winner Calgary Cat died in 2017, Attard broke down in tears talking about his wonderful seven-year-old gelding.

A week after the classic race, Attard is still coming to terms with joy and the pain of Queen’s Plate week.

Attard said Moira came out of the Plate in good shape and she will likely skip the next jewel of the Canadian Triple Crown, the $400,000 Prince of Wales Stakes at Fort Erie on Sept.13. Attard said Moira’s owners are looking to race her in a Grade 1 in the U.S. in the upcoming weeks. The last horse to win the Canadian Triple Crown (the Queen’s Plate, Prince of Wales and Breeders’ Stakes) was the Mike Keogh-trained Wando in 2003.

Talk to Ya Later, with Emma-Jayne Wilson aboard, won the $100,000 Algoma Stakes for three-year-old fillies with an impressive charge in the stretch to catch favourite Baksheesh and win by 3 1/2 lengths. Wilson rode Talk to Ya Later in her first race as a two-year-old last November and won handily. However, in the filly’s next race, on Aug. 6 of this year, the daughter of Perfect Timber out of Sea the Awesome, ran into trouble and finished well back of the field. Wilson was racing at Ascot in England (winning the Shergar Cup Mile) during the race but watched it on closed circuit.

“She got hurt, cut up. I don’t the full details but things didn’t go the way they had hoped,” said Wilson. “I was really hoping that she could rebound, relax for me, the way she did in the first race.”

Talk to Ya Later certainly did that on Sunday.

Full Screen, a three-year-old dark bay gelding owned by Nidel Charfi, captured the $100,400 Elgin Stakes for three-year-old colts and geldings by 4 3/4 lengths with jockey Jeffrey Alderson aboard. The win marked the first Woodbine stakes victory for trainer Julie Belhumeur and for Charfi.

The Mark Casse-trained Gran Spirited captured the $200,000 Simcoe Stakes for two-year-old colts and geldings with Declan Carroll in the saddle. The son of 2015 Queen’s Plate Shaman Ghost has now won two in a row in three starts.

Anam Cara, trained and owned by Sarah Ritchie, won the $200,000 Muskoka Stakes for two-year-old fillies with Patrick Husbands aboard, running her record to 2-0. It was the first stakes score for Ritchie.