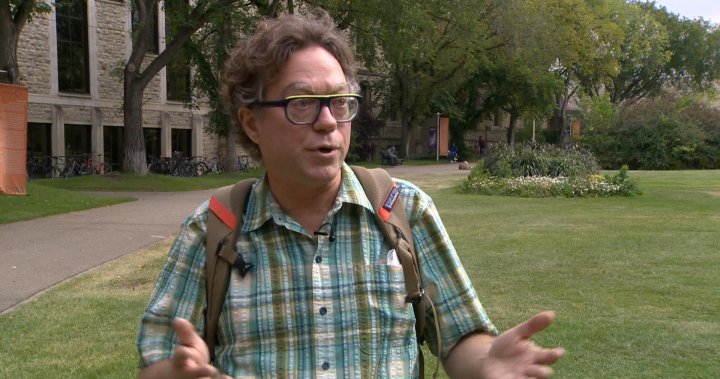 A chemistry professor at the University of Saskatchewan is suggesting reimplementing the COVID-19 mask requirement after comparing the factors that were used to pause the mask mandate to the current situation.

Stephen Urquhart said that the university’s pandemic response team presented a report back in June suggesting a pause in the mask mandate, with a number of factors given that informed the team’s recommendation.

He said many of the things listed in the report are no longer true, and there hasn’t been a reason given as to why a mask mandate hasn’t been reinstated.

“It hasn’t been clearly communicated why the mask mandate hasn’t returned, and one of the reasons I put myself out there is to encourage the administration to return to a mask requirement on campus,” Urquhart said.

He said that the university community can use the report as a benchmark to evaluate the current pause, and that he recently published an article that set out the factors to compare. By doing that, the university would see evidence to support the return of a mask mandate.

Urquhart said the article has received a “huge response” from colleagues and students on campus.

The report said provincial COVID-19 cases and hospitalizations were decreasing, but Urquhart pointed out that there have been successive increases in hospital and ICU admissions in the province.

Another factor listed in the report said that pressures on the health-care system were decreasing, but it was noted that over the summer the Saskatchewan Health Authority reported a series of disruptions to emergency services across the province.

Six other factors were listed in the report, noting that COVID-19 wastewater levels were decreasing, university case counts were dropping, and that other post-secondary institutes in the province no longer implemented mask mandates, many of which no longer being the case.

Urquhart said his approach has the support of colleagues and students on campus.

“A lot of people are concerned about the current situation.”

“Mask mandates help protect the pack. Wearing a mask protects me from other people, but also protects others from me,” Urquhart said.

He said colleagues who have reached out to the pandemic response team have not received a response back, so he decided to take a different route.

“I think what we’re really looking for is leadership. As an instructor, I try to lead by example by wearing the mask, and carrying masks around with me so that if other people want a mask I can give them one, and they can have the resources they need to be safe and protect others.”

Darcy Marciniuk, the associate vice president of research at USask, as well as the chair for the university’s pandemic response team, said the team has been meeting regularly over the summer and the fall.

Marciniuk said that the team is monitoring a number of factors within USask and the surrounding community, and that the pause on the mask mandate could be lifted to reinstate it.

“It is possible that the mask mandate, or the current pause, may be eliminated, that is masking would return. If certain indicators reach thresholds, and there’s no one sort of black-and-white, it’s a multi sort of index discussion and synthesis of data,” Marciniuk said.

“Currently, we are noticing increased activity here on campus, but it hasn’t reached the setting and the situation where we would return masks.”

He said masks are used in clinical settings, but that it’s not system-wide, and that they are offered to anyone who wants one.

Marciniuk said the team has had concerns sent to them from faculty and students, and want to address those concerns.

“We’re trying to be quite objective and evidence-informed in terms of this decision.”