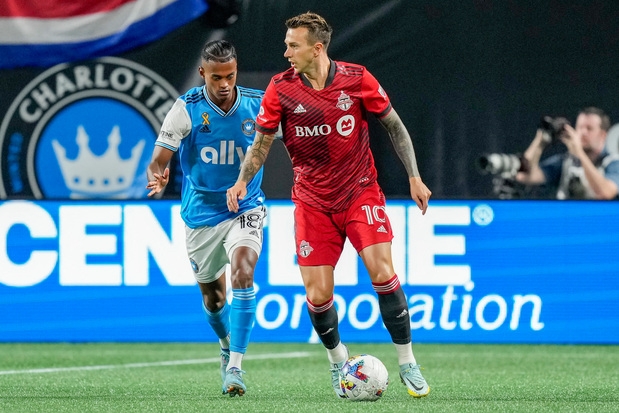 Nothing could be finer than a win in Carolina for Toronto FC.

With spectacular goals by Italian internationals Lorenzo Insigne and Federico Bernardeschi, TFC defeated host Charlotte FC 2-0 in a huge match for both sides at Bank of America Stadium on Saturday night.

The win enabled Toronto to jump ahead of Charlotte in the Eastern Conference standings. The Reds (9W 13L 6D) are now only three points out of a playoff spot with six games remaining and three teams to jump over. TFC’s playoff chances seemed dead in the water a few weeks ago but now reaching the post-season looks like a real possibility.

“I thought we battled really well today in a tough environment,” said TFC goalkeeper Alex Bono. “I give the guys a lot of credit. It’s not easy to win on the road in this league, so for us to come into this stadium and get three points is really exciting.”

Saturday’s victory definitely had an Italian flavour as Insigne scored in the 49th minute — his fourth MLS goal — with Toronto’s first shot on target in the game. The goal came on a perfect corner kick by Bernardeschi, who then scored his fifth goal of the season in the 66th minute to put Toronto ahead by two.

The game in Charlotte, where TFC was playing for the first time, was delayed for just over an hour because of lightning.

Bernardeschi, who joined TFC mid-way through this season from Juventus, has continued to prove his worth at both ends of the field with some splendid, consistent play. Insigne has scored some big goals and has been explosive at times on the attack, but Bernardeschi has been the more impressive of the two so far.

“Nothing surprises me anymore with those guys,” said Bono about Insigne and Bernardeschi. “I’ve seen enough in training now to know that anything is possible when they get on that field.”

The victory was also sweet redemption for Bono, who made some great saves in the second half to preserve the win after letting in a couple of iffy goals in the previous two games. It was Toronto’s third clean sheet of the season.

“I was a little disappointed with the weight that I wasn’t carrying over the last couple of games so it felt good to get back in there and feel confident and the guys around me played awesome,” said Bono. “We defended as a unit and I felt really good.”

Charlotte had an edge in possession (59% to 41%) and recorded 19 total shots to 11 by Toronto, though many of the home side’s shots were from long rage. The host side managed four shots on goal to three by Toronto and had six corners to three by the visitors.

TFC was without veteran starting midfielders Jonathan Osorio (Toronto’s leading goal-scorer with nine) and Mark-Anthony Kay. Osorio had reportedly not been feeling well this week. In their place, coach Bob Bradley started teenagers Jayden Nelson and Deandre Kerr, who left the game in the 37th minute when he appeared to hurt his left hamstring. Kerr was replaced by yet another teenager, Kosi Thompson. Bradley started Ayo Akinola at forward ahead of Jesus Jimenez again. Both strikers are in horrendous slumps. Jimenez, who has eight goals on the season, hasn’t scored in 11 straight games while Akinola is goal-less now in 14.

The Reds scored four goals against Charlotte in the first half the first time the two sides met this season on July 23 at BMO Field (the first time all three Italian players were on the field at the same time for TFC), but Toronto couldn’t muster a shot on goal in the opening 45 on Saturday night. For a team supposedly fighting tooth and nail to get into the playoffs, TFC looked rather listless in the first half.

Bono was good from the start, making a nice leaping save on a Kerwin Vargas flick at the goal in the 18th minute.

Charlotte almost opened the scoring in the second minute of the second half when Kamil Józwiak picked up a pass to go in alone on Bono but then shot the ball off the side of the goal.

Toronto opened the scoring a minute later on a magnificent corner kick by Bernardeschi who found his countryman at the back post and Insigne right-footed a shot into the top left corner.

Bono made a great save on Andre Shinyashiki in the 65th minute to keep Toronto ahead after a giveaway by centre back Lukas MacNaughton. Bernardeschi made a good play getting back and clearing the ball.

Seconds later, Bernardeschi doubled Toronto’s lead when he picked up a cross-field pass from Insigne on the left side, moved into the box and left-footed a beautiful shot into the far left corner of the goal.

Bernardeschi almost scored his second in the 76th minute on a header after a great set-up by compatriot Domenico Criscito but Charlotte defender Christian Fuchs managed to boot the ball out as it headed towards the goal.

TFC centre back Chris Mavinga, who had struggled with confidence and health the last season and a half, continues to round into form and made some great defensive plays in the match. Other standouts for the Reds were right back Richie Laryea and Thompson in the second half.

Toronto next plays on Wednesday night against the visiting LA Galaxy and former coach Greg Vanney, who was at the helm when TFC won the Domestic Treble in 201. The Reds won the Canadian Championship, Supporters’ Shield and MLS Cup title. Former Reds Victor Vazquez and Mark Delgado are also with the Galaxy.