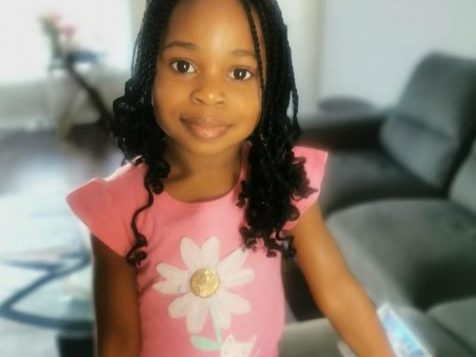 Her name was Mitchell Chukwudumebi Nwabuoku, but her loving family also called her Mimi.

Instead of enjoying a beautiful summer day with the four-year-old girl, her mom, dad and siblings were burying her following a July 26 tragedy that rocked the whole region.

The little girl, who was born in Dallas, Texas, in 2017, and moved to Milton in 2018, died last week when she was struck by a Go Train on the tracks at Cawthra Rd. and Dundas St. W.

“It’s devastating,” said her uncle, David Kivang Bebiem, who added Mitchell lit up every room she entered. “She was such a special child.”

He and his wife were supposed to be participating in a church service this week that would have seen them officially become Mitchell’s god parents.

Prior to the tragedy, the intention was to go to the park and eat some ice cream. But somehow the four-year-old and other children ended up going through a porous section of a fenced area — designed to keep people away from trains — and ended up on the tracks.

“It’s a direct route from the playground to those tracks,” said Bebiem, who feels it would be worth authorities taking a look at danger potential there.

Nothing can be done to bring back Mitchell, but perhaps another child could be prevented from getting out on to the tracks.

There is no question there were many holes in that fencing, and neighbours said people illegally crossing the tracks as a shortcut was common place. The very next day, crews were at the site, repairing the fencing that has been cut or knocked over.

It was a day too late to help in this case.

An investigation is underway to determine what happened, but her father told media she was not attempting to cross.

She was chasing “butterflies,” her grieving father, Emmanuel Nwabuoku, told CP24 Tuesday. “Mitchell is an angel, she talks like an angel. Mitchell acts like an angel.”

The family was staying at his brother’s apartment while he was in Toronto for business and so the family could collectively mourn the recent death of Emmanuel’s mother, Felicia Nkem Nwabuoku.

Perhaps this would be a good case for a Coroner’s inquest to determine what can be done in the future to prevent other tragedies. How long had it been since that fence was last repaired?

But this day was about remembering Mitchell.